Word Barn Makers Series: The Art of the Song

Word Barn Makers Series: The Art of the Song 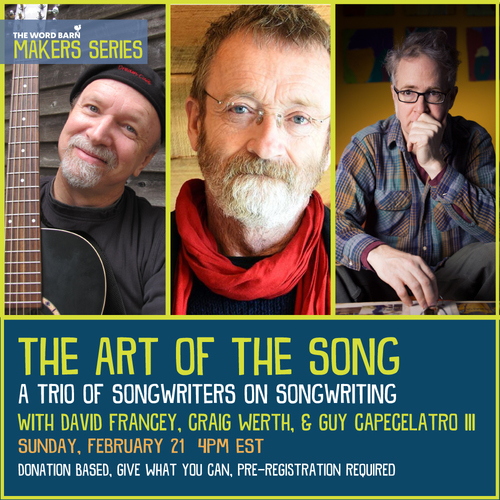 The month of February is synonymous with the RPM Challenge - an annual creative challenge to write and record music in the month of February - so we thought it would be most appropriate to dial in three of our favorite songwriters and have them provide insight on their songwriting process.

Join in if you need some RPM inspiration, curious about the songwriting process, or interested in what makes for a great song, how you know when it's finished (and not).

Because songwriters have not been spared by the challenges of this past year, this workshop is by suggested donation of $20+ on a give-what-you-can basis - even if it is $0, we'd love to have you be part. Any and all funds raised will be divided among the panelists, The Word Barn, and the Continuum Arts Collective (a wonderful non-profit that supplies instruments and art supplies to underserved kids in NH and ME).

David Francey is a Canadian folk singer, songwriter, and storyteller who has won three Juno Awards (Canada's Grammy), and three Canadian Folk Music Awards. "Francey's clear, simple songs speak volumes to his followers. After a decade in music, David Francey is known as one of Canada's finest tunesmiths and a champion of the Everyman, admired for his less-is-more approach to writing. It's amazing how he manages to address deep stuff with such spare ingredients." - Edmonton Journal

Craig Werth has three original solo albums and one collaboration recording with the brilliant Guy Capecalatro III. His work can be heard on two David Francey albums ("Right of Passage" and "The Seaway") and he makes guest appearances on many others. Craig co-produced Francey's Right of Passage which won a Best Album Juno.

Guy Capecelatro III is an enigmatic musician, a prolific singer and songwriter who tends to shun the spotlight, despite his contributions to an ongoing list of bands that includes Unbunny, Two Ton Santa, Beekeeper, and The Buckets. He also has more than a dozen solo efforts to his name, albums that include everything from country to metal, murder ballads to found sound.