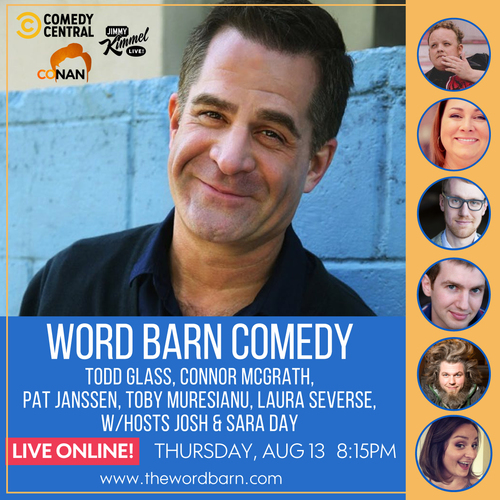 Join us for our Word Barn Comedy LIVE online!

This event will be a *PAY WHAT YOU CAN* live stream, but you can secure one of the limited spots by making a donation of your choice and being sent the ZOOM link in advance of the show.

Purchase the $0 ticket, and make a donation in the next CheckOut screen. You will find the Zoom link and password on your electronic ticket!

A portion of proceeds will be going to the Grassroots Law Project – an effort started by Shaun King to radically transform policing and justice in America.

Join us for an evening of laughs and comedy at the Word Barn Comedy featuring Todd Glass (Glass is perhaps best known for his Netflix Special "Act Happy", his appearances as a contestant on the second and third seasons of NBC's Last Comic Standing and has appeared regularly on programs such as Jimmy Kimmel Live!, Late Night with Conan O'Brien, Tough Crowd with Colin Quinn, The Dennis Miller Show, Politically Incorrect, Louie, Tosh.0, Mr. Show with Bob and David, Preston and Steve and had his own Comedy Central Presents, Laura Severse (Finalist Boston Comedy Festival), Toby Muresianu (Comedy Central), Pat Janssen (HBO), Connor McGrath (Opened for Mark Normand), and hosts Josh and Sara Day (Vermont Comedy Club, ImprovBoston, Married in a Quarantine).