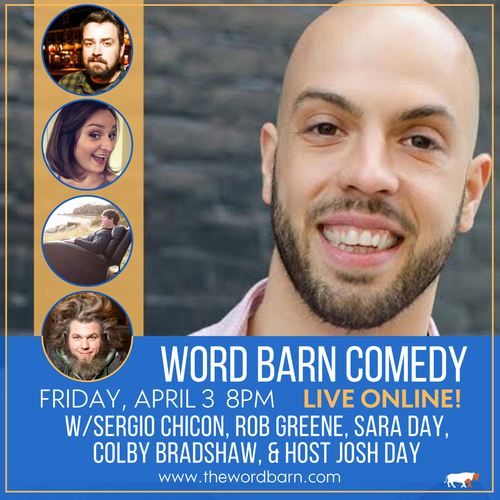 ***ZOOM link and password will be on your electronic ticket***

A portion of proceeds will be going to the Exeter Hospital United in Wellness Fund, and to the Concord Hospital to help with their work battling this virus. Be well, stay safe, and tune in and laugh with us.

Sergio Chicon was born and raised in New York City’s Lower East Side. His energy and stage presence brings out the natural performer that he is. Always the entertainer amongst friends and family, its no wonder that in the short time he has been doing stand up, he has moved along very quickly, performing in clubs all over the city. Sergio’s comedy style cannot easily be labeled, though it can fall in the categories of urban, physical and self deprecating humor. His uninhibited animated style and high energy capture the audiences’ immediate attention. His mannerisms and facial expressions allow him to dip in and out of characters such as his favored “construction worker”.

With few limitations on and off stage, Sergio is the producer of his own new talent show, Serg’s Fresh Faces, at New York City’s Laugh Lounge, featuring some of the freshest and hottest new talent in New York City. Sergio was featured Comedy Central’s “Gotham Comedy Live” “Funaticos” & Comedy Central’s “Los LOL”, MTV TR3S, Miami Comedy Festival, SITV, Comedy Net, BET on Blast, and performed at the Comedy Café in Amsterdam. He tours the country with Chris DiStefano currently.