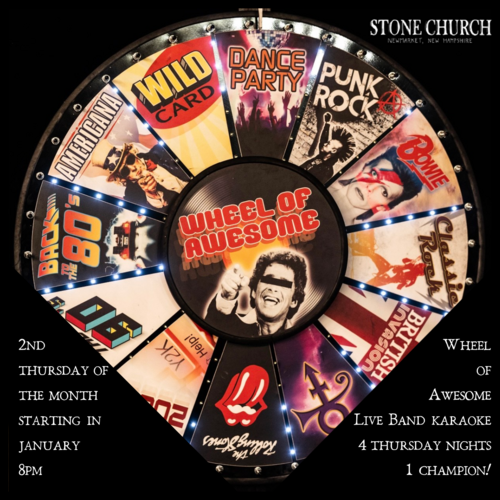 It’s a star-studded extravaganza incorporating live music, improvisation and comedy in an unpredictable “no setlist” format where a spin of the ‘Wheel of Awesome’ dictates what the band does next.

The band will be at the mercy of the wheel and the categories on it such as “The 2000’s, “Rolling Stones”, “I love the 90’s”, “Punk Rock”, “Prince” and “Girl Power” just to name a few. There’s a even a drinking song called “Shots and Beers”! You never know what will happen next and neither does the band so come see what all the fuss is about!

But wait! There's a twist! We are opening these night's up to you!!!! First set will be the wheel and second will be LIVE BAND KARAOKE! We will Wheel out the 2nd Thursday of the month January-April, there will be winners (PRIZES TOO!) and come April will be the round for Champions! This is going to be so much FUN, grab your friends and get on up the hill. We can't make this shit up!