Vapors of Morphine with special guests The Tercet

Vapors of Morphine with special guests The Tercet 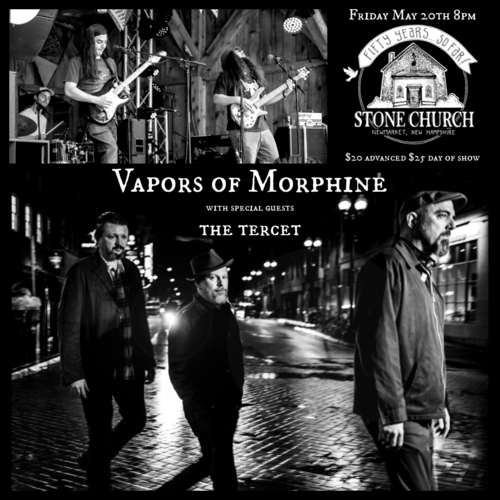 VoM perform much of the Morphine repertoire, plus new material and original versions of selective covers. They expand on the ethereal, hypnotic sounds popularized by the group in the nineties, and dig into their influences, from African music to delta Blues.

“Fear & Fantasy is an album existing in its own time and place.”

Vapors was formed over a decade ago by Colley, singer and multi-instrumentalist Jeremy Lyons and Morphine’s original drummer Jerome Deupree. Drummer Tom Arey (J. Geils Band, Peter Wolfe’s Midnight Ramblers, Ghosts of Jupiter) replaced Deupree in 2019. Their new album represents both a new era and a return to form for Vapors of Morphine.

Fear & Fantasy, in its often lush arrangement, recalls Morphine’s final album, The Night, where Deupree teamed up with Billy Conway, the drummer who had replaced him; this time Arey plays on one side, Deupree on the other. It only seems fitting when both bands have been blessed with a revolving cast of top-notch percussionists.

Fear & Fantasy is available for direct order from the UK  here, as a limited edition 180 gram marbled colour gatefold LP, plus CD. It is distributed in the US by Cobraside and can be ordered through many retail outlets.

The Tercet is a power trio based in coastal New England. With big energy, and ambitious original music combining styles like progressive, post rock, jazz, and avant-garde, the group brings a unique live experience to the stage. Featuring members of People Like You, Stop Tito Collective, and Harsh Armadillo.