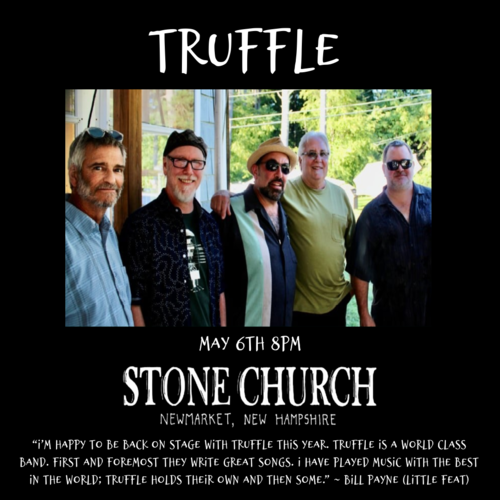 What can you say about a band that’s been together since 1986? Plenty! While many bands come and go within a few years, (Savoy) Truffle is in it for the long haul. They are players and entertainers; it’s what they do! Truffle is David Bailey (bass, vocals), Ned Chase (mandolin, guitar, lap steel & vocals), Mike Gendron (drums), Pete Kowalski (percussion) and Dave Gerard (vocals, electric & resonator guitars). All but Mike have been creating music together since 1986. Performing in all but ten states across the U.S., playing as many as 275 shows a year. Mike (still the rookie) joined the band with years of experience in 1996; the only lineup change in the band’s history. Truffle has achieved widespread popularity by headlining many respected venues as well as sharing the stage with international acts as Little Feat, Phish, The Band, Dave Matthew’s Band, David Lindley, The Radiators, and Blues Traveler to name only a few. Truffle has released five albums and assorted compilations (including “Nervous Laughter” on the November/Sony label) as well as contributing to Gerard’s five solo records. Their music has appeared on major motion picture soundtracks. Their latest studio release “That’s Right” is a collection of songs penned and arranged by all the members ; with quality song writing, memorable melodies and tasty production, it is by far their most mature record to date. 2016 brought the band’s 30th Anniversary culminating in a Double CD Release “ 30th Bootleg Bandiversary Anthology”. Their sound, a mix of swampy soul, R&B, Bluegrass, New Orleans grooves, and World music, has been stewing in a pot for years, and is ever changing. Their live show, never dictated by a set list, is eclectic and different every night. Truffle performs in a full electric ensemble as well as an acoustic trio without drums. You need to experience it for yourself ~ Enjoy! “I’m happy to be back on stage with Truffle this year. Truffle is a world class band. First and foremost they write great songs. I have played music with the best in the world; Truffle holds their own and then some.” ~ Bill Payne (Little Feat) “Truffle is musically tight, their lyrics are inspired and they do not rely on gimmicks for appeal. Instead, Truffle offers songs with the listener in mind – songs that have been masterfully crafted and arranged.” ~ Showcase, Foster's Daily Democrat (Dover, NH) “The new CD “That’s Right” is vintage Truffle all the way. It reflects a band that has not only established a strong identity, but shows continued growth and maturity” ~ The Wire Magazine (Portsmouth, NH) “These guys have played with many of the hottest acts touring today, seeing most of the acts mare than five times, I can honestly say that an evening with Truffle sounds as good as any of the rest” ~ Vermont Review (Statewide, VT)