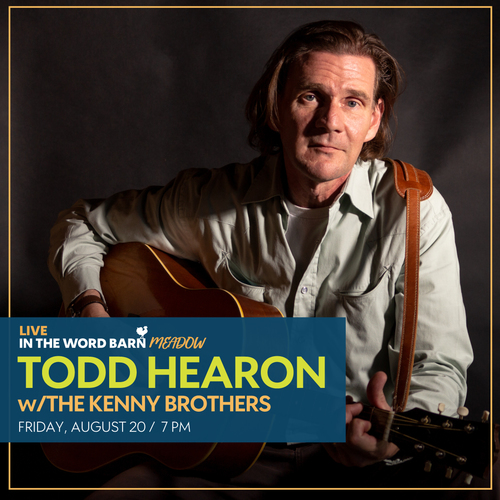 Todd Hearon is an award-winning poet and songwriter, born in Fort Worth, Texas, and raised in the Blue Ridge Mountains of North Carolina. The hymns and folk songs of his youth continue to influence his music, along with more edgy, contemporary Americana and Country-Rock sounds. He played bass and guitar for The Spin, one of the most successful alternative rock bands to come out of the Dallas Deep Ellum scene in the 1990s. After a career spanning six years and four albums, extensive touring and the cultivation of a broad fan base, he hung up his musical hat for graduate school in Boston, earning his Masters and PhD in English and Irish Studies, and co-founding The Bridge Theater Company, an independent troupe in Boston’s Theater District. He’s the author of three collections of poems, Strange Land, No Other Gods and Crows in Eden; his poems have received the PEN/New England ”Discovery” Award, the Friends of Literature Prize (Poetry magazine and the Poetry Foundation), the Rumi Poetry Prize (Arts & Letters) and the Campbell Corner Poetry Prize (Sarah Lawrence College). He was the Dobie Paisano Fellow/Writer-in-Residence at the University of Texas in Austin and served as the Dartmouth Poet-in-Residence at the Frost Place in Franconia, New Hampshire. His poems, essays and plays have appeared widely in literary journals in this country and abroad.

Music has never been far from his center, even as he extended his reaches into other art forms. Armed with a 1950 Gibson J-50 named Myrtle, and a host of new songs that hearken back to his roots in southern folkways and deep-flowing Americana streams, he’s back, ready to share his music with the world. When he’s not gigging solo in his adopted home-base of New Hampshire, he can be found playing with his trio, MYRTLE, or hammering out old-timey numbers on banjo and mandolin with the Boston-based Barn Burners String Band.