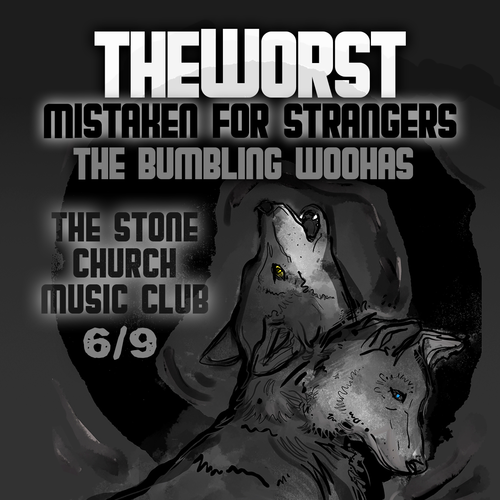 Hailed by Alternative Press as the "...glorious love child of Joan Jett & Kurt Cobain," theWorst has been on a meteoric rise since their inception. Led by bandleader and true survivor, Brooke Binion, the band has gained a reputation as a one-of-a-kind raucous live act, fueled by an aggressive raw sound, anthemic songs and a brutally honest lyricism that is rare in today's highly commercial and often fabricated mainstream music scene. Having toured nationwide and coast to coast since 2016, theWorst is comprised of Binion on lead vocals and guitar, Will Bradford (SeepeopleS) on bass and Craig Sala (Paranoid Social Club, Kurt Baker, Planeside) on drums. The band earned wide critical acclaim with the release of their debut album Jane Doe Embryo (RascalZRecordZ 2017), and the recent release of their new singles, 'Blacksheepish,' and 'Yes Regrets' featuring Dana Colley (Morphine, Vapors Of Morphine).  The singles and forthcoming record were produced by Will Holland (Pixies, Fall Out Boy) and recorded at the legendary Chillhouse Studios in Boston, MA. The album also features guest musical contributions from the likes of Colley, Tony Bevilacqua (The Distillers), Nikki Glaspie (Beyoncé, Nth Power, Maceo Parker, Griz), and Nate Edgar (Nth Power, John Brown’s Body) and is being released on June 3 on RascalZ RecordZ.  For more info / tix info / socials / streaming links -

about Mistaken for Strangers:

Mistaken for Strangers is a 4-piece based out of Rochester, NH, consisting of Josh Evans on guitar, Brian Hennigan on bass, Ben Leonard on guitar and vocals, and A.J. Senechal on drums and vocals. Originally formed in 2017, the band released their debut album "Churchill" in May of 2019, featuring the single "The Fastest Beer in the East". Over their 5 years together, they've had the privilege of sharing stages with some of the best musicians inside and out of New England. With influences from every corner of rock (and beyond), "alternative" is probably the simplest way to describe the sound of M4S. Throughout the pandemic, they have been working on a follow-up to their first album, which they hope to release in the very near future.

The Portland, ME based theatrical indie-punk act The Bumbling Woohas have toured the country and gained wide acclaim for their debut record Welcome To Trash Clown City. The band is currently in the studio recording their follow up album. For more info please visit: