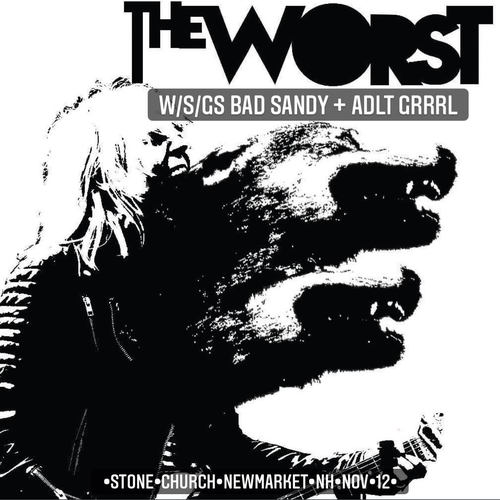 Hailed by Alternative Press as the "...glorious love child of Joan Jett & Kurt Cobain," theWorst has been on a meteoric rise since their inception. Led by bandleader and true survivor, Brooke Binion, the band has gained a reputation as a one-of-a-kind raucous live act, fueled by an aggressive raw sound, anthemic songs and a brutally honest lyricism that is rare in today's highly commercial and often fabricated mainstream music scene. Having toured nationwide and coast to coast since 2016, the theWorst is comprised of Binion on lead vocals and guitar, alongside Will Bradford (SeepeopleS) on bass and Craig Sala (Paranoid Social Club, Kurt Baker, Planeside) on drums. The band earned wide critical acclaim with the release of their debut album Jane Doe Embryo (RascalZRecordZ 2017), and the recent release of their new single, 'Blacksheepish,' all produced by by Will Holland (Pixies, Fall Out Boy) and recorded at the legendary Chillhouse Studios in Boston, MA. Recently, the band dropped a new single for charity, entitled 'Lifer,' on the non-profit record label CommunityZ RecordZ, with all the proceeds going to the local Maine charity, Maine Trans Net, an organization that supports transgender people and the challenges they face in today's world. Currently theWorst are finishing their second full length album with Will Holland, entitled Yes Regrets, which features guest musical contributions from the likes of Dana Colley (Morphine, Vapors of Morphine), Nikki Glaspie (Beyoncé, Nth Power, Maceo Parker, Griz), and Nate Edgar (Nth Power, John Brown’s Body) and is slated for release on RascalZRecordZ in the spring of 2022. The title track for the album dropped as a single on Black Friday, November 27th (RascalZRecordZ 2020) on all streaming platforms, and features Dana Colley. The 'Yes Regrets' music video was created and directed by multi-media artist Sparxsea. The band is also announcing their first tour dates since before the pandemic.