The Worst/ Pink Blazer/ The Jerritones

The Worst/ Pink Blazer/ The Jerritones 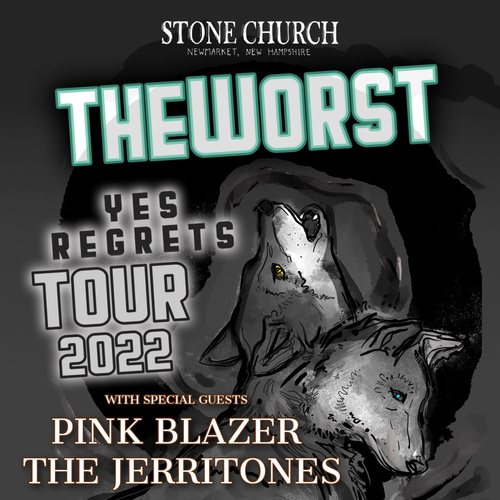 Hailed by Alternative Press as the "...glorious love child of Joan Jett & Kurt Cobain," theWorst has been on a meteoric rise since their inception. Led by bandleader and true survivor, Brooke Binion, the band has gained a reputation as a one-of-a-kind raucous live act, fueled by an aggressive raw sound, anthemic songs and a brutally honest lyricism that is rare in today's highly commercial and often fabricated mainstream music scene. Having toured nationwide and coast to coast since 2016, theWorst is comprised of Binion on lead vocals and guitar, Will Bradford (SeepeopleS) on bass and Craig Sala (Paranoid Social Club, Kurt Baker, Planeside) on drums.  The band earned wide critical acclaim with the release of their debut album Jane Doe Embryo (RascalZRecordZ 2017). In April of 2022, theWorst released their sophomore album Yes Regrets. The album was produced by Will Holland (Pixies, Fall Out Boy) and recorded at the legendary Chillhouse Studios in Boston, MA, and features musical contributions from the likes of Colley, Tony Bevilacqua (The Distillers), Nikki Glaspie (Beyoncé, Nth Power, Maceo Parker, Griz), and Nate Edgar (Nth Power, John Brown’s Body). The album has been featured in Alt-Press, Revolver, Under The Radar, Brooklyn Vegan and Glide Magazine to name a few. Currently the band is gearing up for let 2 (west coast) of the album release tour which starts in September, 2022.

The Jerritones began in 2018 as a collaboration between High School friends Jack Harrington, Eben Ritchie, and Clayton Daniels. Combining their knack for genre-bending punk songwriting with an often wry and facetious sense of humor, the band began writing and recording original songs at Ritchie’s home, performing them for small groups of friends and classmates at school events. Their songs are most often centered around zany caricatures of mundane life, setting verses about things such as Fast Food and 9-to-5 Office Jobs to an energetic pastiche of musical styles, new and old. Early onstage appearances and mannerisms mirrored this energy, with the band sporting matching business-formal attire and bug-eyed welding goggles to create a DEVO-esque sense of unity.

The band’s first album, The Night Shift, was recorded and released independently in 2019. The album used a combination of electric instruments and drum machines to account for the band’s lack of a drummer or bassist. To this day, the band continues to employ sequenced beats and audio cues in their live performances, using the medium to their advantage as a means of engaging the crowd and enhancing their sound with odd and off-kilter sounds and effects less-often heard in live punk-oriented performances. The band’s joyous and apparent disregard for their ragtag appearance remains an integral part of their music; The Jerritones can be seen shredding and headbanging to a pre-recorded drum and bass ensemble with as much enthusiasm as the punk and alt rock groups of the 90s and early 2000s that influenced them.

Now performing as a duo between Harrington and Ritchie (with occasional cameos from other musically-inclined acquaintances), The Jerritones have begun to make appearances at local Seacoast, NH venues and open mic opportunities. The band continues to pursue a sound as comedic and jarring as it is fun and danceable, with a mix of old originals, cover songs, and new music from their forthcoming second album Monkey Habitat, due out in early 2023.