The Stone School Series Presents: An evening with David Wax Museum (duo) on the outdoor stage

The Stone School Series Presents: An evening with David Wax Museum (duo) on the outdoor stage 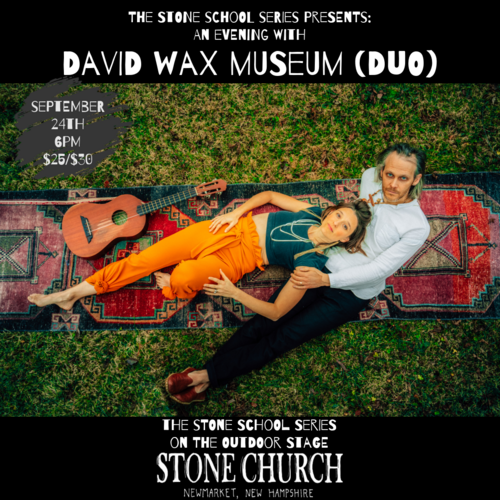 “Human Nature is a Stranger to the Notion of a Pause”

Pioneering folk musicians David Wax and Suz Slezak are the plucky husband-wife duo behind the eclectic, exuberant “Mexo-Americana” band David Wax Museum. After 14 relentless years touring the country and world, half of them with their two young children in tow, COVID’s abrupt disruption in March 2020 created a first jarring, then welcome creative pause for the Charlottesville, VA-based band. Not wasting a moment, Suz–who grew up homeschooled, playing the fiddle, singing rounds, and drinking raw milk fresh from her family’s homestead farm–immediately dug up their small downtown front yard to plant the first real garden of the indie rocker couple’s nomadic adult lives.

Before the pandemic, the ascendant band was enjoying newfound success with their 2019 first label release Line of Light (on Austin’s award-winning Nine Mile Records), subsequent national TV debut on CBS This Morning: Saturday, and three distinct features on NPR’s World Cafe. They built bridges performing at the wedding of Democratic presidential hopeful (now Transportation Secretary) Pete Buttigieg and his husband Chasten–and then in 2021 their plaintive ballad “Big Sur” debuted during the marriage scene on Netflix #1 show, Firefly Lane. David Wax Museum even had a big new bombastic studio album with their boisterous six-piece band in the can, but then the sudden shutdown temporarily shelved it, forcing David and Suz to unpack their toiletries bag, park their tired tour van in the driveway, and finally tuck their children into their own beds, for months on end, for the young family’s first time.

“Our children (ages 4 and 7) have toured in 43 states, seven countries and fallen asleep on countless disgusting green room floors,” says Suz, who was pregnant with or nursing one of them all those years on the road. “Now that we’ve been home a year, I’m not sure they even remember what tour is!”

As Suz trellised cucumbers and butternut squash, and quilted with their kids, David quickly converted their cramped, dormered attic room into an intimate performance space. The hard-working pair immediately took to touring the live-stream stages of Facebook/Instagram/YouTube Live and Zoom when all their beloved, well-trod venues, from D.C.’s esteemed 9:30 Club to Philadelphia’s Johnny Brenda’s, shuttered overnight. Such creative constraints laid the groundwork for the band’s most fruitful period ever.

The album’s title, Euphoric Ouroboric, captures the emotion and experience of diving headfirst into the digital tools of remote recording, spending hour upon hour “in a jubilant dialogue with the self,” as David puts it. He elaborates, “‘Ouroboric’ comes from the mythological ouroboros snake that eats its own tail. I often felt like there was something self-referential and all-consuming about learning to record and edit myself. But, at the same time, I was having such a blast rediscovering my love for being ‘in the studio.’”

The album’s joyful lead single “Juniper Jones,” is an upbeat, whimsical song shimmering with the band’s signature handmade Mexican instruments–though this time around– dramatically altered, distorted and processed. They sit nestled alongside the pleasantly warped sounds of flute and accordion, a surprising farfisa, David’s voice burbling through pedals, tasty electric guitar hooks, and a triumphant bridge for trumpet and saxophone. It’s the band at its light-hearted best, singing to Juniper, the seeker, who’s not satisfied with the world as it is and dreams of greatness.

But what does it mean to make folk music in the midst of a pandemic when no one can be in the same place, let alone the same room? This question animates Euphoric Ouroboric. If technology was going to be so deeply enmeshed in the making of the music, why not embrace the sonic interplay between human and machine, and leave behind traces of this process? Why not create a world where the drum machine sounds coexist with human performances, with a purposeful blurring of the lines? And so performed drums are made to sometimes sound and feel digital, and the digital drums flex here and there, as if alive, away from any grid. The resulting collection of ten homespun postmodern songs includes gems such as “Every Bit of Love,” with its programmed hi-hats softened by pitch-shifted harp and the low hum of a pump organ.

“Pattern of Mind,” a tropicália channeling of the Talking Heads, is a meditation on the nature of thought during quarantine, as the band grappled with the loss of the usual crutch of a busy tour schedule. The vocoder delay on the vocals mirrors the grooves of the mind, while the splash of merengue horns gives the song a quintessential David Wax Museum feel. “Keep Your Light Steady,” was a lyric that had been kicking around for a while but poignantly took on new resonance amidst a life led in isolation, with fans reaching out, describing the band’s thrice-weekly live streams as a lifeline during such difficult times. “Ghost of Summer” is a reimagining of the traditional Mexican folk song “El Coconito.” In Wax’s retelling, it becomes a cautionary tale about navigating a summer in quarantine with small children.

“We did our best to impart the joys of the season despite the circumstances, but

I sometimes felt like we were living in a poor carbon copy version of summer,” explains Wax.

We go to places

The band’s genre-defying, shapeshifting personality is on full display throughout the record. The psychedelic “Real de Catorce” takes the Panamanian template of fiddle, penny whistle, and percussion and spikes it with a slithering saxophone and trembling synths while the more downtempo, nuanced songs that spring from this slowed-down period allow us to watch the maturation of these artists, as if in real time. And yet the boisterous and bombastic rears its head, making it obvious how a band with this kind of breadth has comfortably shared the stage with acts as diverse as The Avett Brothers, Latin legends Los Lobos and Buena Vista Social Club, and hushed indie darlings Gregory Alan Isakov and Mandolin Orange.

As prolific as this period has been and as bountiful as the front yard garden becomes, it will be hard to keep this band off the road once venues open back up. That will come as no surprise for those who caught their national show-stopping debut at the Newport Folk Festival, or were coaxed into sitting on the floor of any number of sweaty rock clubs so the band could jump down off the stage to sing an acapella neo-gospel hymn, or have attended one of their immersive, surround-sound Golden Hour concerts, where each attendee listens blindfolded in the dark. The band counts on the enduring primal need for such communion, through the transcendent shared experience of live music. While touring remains off the table, they offer up Euphoric Ouroboric, a balm for these isolated times, a search for connection and humanity across the digital divide.