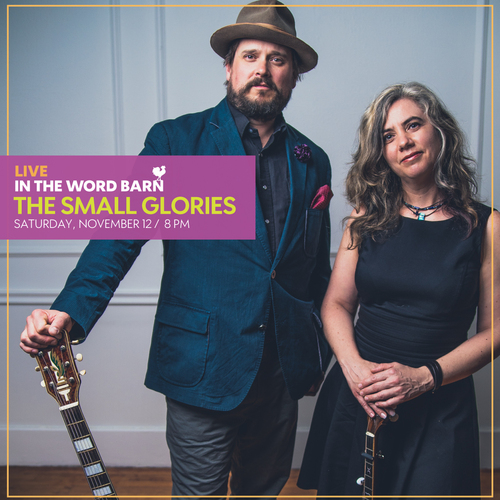 Folk Alliance International Artist of the Year and JUNO Award nominees, The Small Glories come to The Word Barn!

With a stage banter striking a unique balance between slapstick and sermon, these veteran singer-songwriters have a way of making time disappear, rooms shrink, and audiences feel as they are right there on the stage with the band — writing the songs, living the songs, performing the songs. It’s not uncommon for listeners to find themselves laughing, dancing, crying, or caught up in a good ol’ fashioned sing-along.

It’s this yearning for understanding which finds the band often taking more time to introduce a song than it actually takes to play it. Luft, an original member of harmony sweethearts The Wailin' Jennys and whose parents were folksingers influenced by the great activist Pete Seeger, knows that sometimes a song is all you need to bring people together. But often, it is more. “(Seeger) was the king of uniting people through singing,” Luft says. “There’s so much animosity and divisiveness in our world these days… as artists, part of our job is to somehow create unity.”

The Small Glories duplicate and reinforce each others’ many strengths and yet allow their distinct personalities to shine through, resulting in a live show that is as heartwarming as it is hilarious, as finger-picking proficient as it is relatable, and as Canadian as, well… it’s very Canadian. But that hasn’t stopped them from winning over audiences from Nashville to the Australian outback.