THE SILKS with special guests JAKE DAVIS & THE WHISKEY STONES

THE SILKS with special guests JAKE DAVIS & THE WHISKEY STONES 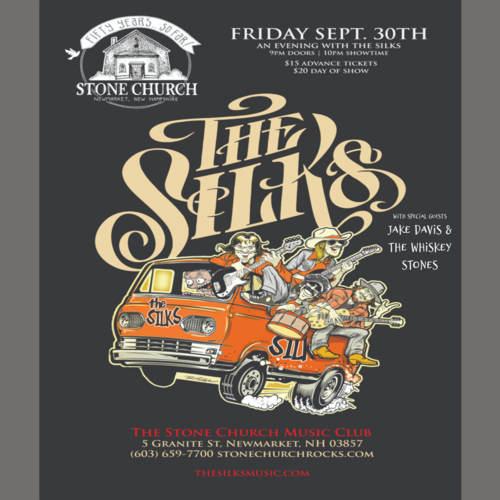 The Silks deliver honest sounds of the blues-based rock n roll variety. You’ve got guitar pyrotechnics galore from frontman Tyler-James Kelly. Chicken-pickin’ or taking a soaring lead break, it’s quickly apparent Kelly is on a whole’nother level. It makes you wonder just when did he get his first real six-string? Then there’s the voice. Bluesy, however you want to describe it, it just sounds like ripping a telephone book in half and feels like scratching a really good itch.

“I never wanted to be a solo artist, with a backing band,” says Kelly. “You can always get pros who can play behind you. But it doesn’t have the organic feel of a band. I don’t know what it is about playing with these cats. But we all totally lock in when we play. At the end of the day, we’re just a bunch of animals who want to rock. It’s not a careerist thing. We got together so we could f*ckin’ play music together.” – Tyler-James Kelly

The Silks nail down the groove with its rhythm section of Uncle Sam Jodrey on drums, Jonas Parmelee on bass and Johnny Trama on rhythm and lead guitar. Fast songs, slow songs, it doesn’t matter. For this humble group of seasoned players, it’s all about the dance floor, and with the right chemistry, the dance floor reciprocates.

Jake Davis is a young man with a honeyed-voice, sharing new songs for old souls. Old souls who has survived the trials and troubles of labor, love, and loss. Olds souls who get up when the fall. Old souls who has been molded by long nights, mild neurosis, ruckus-raising hootenannies, temptation, and American music.

Jake Davis & the Whiskey Stones is a cast of Seacoast NH’s finest pickers. Beyond a hearty voice and an acoustic guitar, Davis’ music is brought to life with smooth banjo pickin', Telecaster twang, and a tight rhythm section. Blending old-time, bluegrass, jazz, and country, these handsome gentlemen generate a sweet, salty, and soulful Americana sound.  The band is celebrating the release of their debut album, Out in The Weeds, recorded at the Electric Cave in Portsmouth, NH."