The Samples (Early Show) - Live in The Word Barn Meadow

The Samples (Early Show) - Live in The Word Barn Meadow 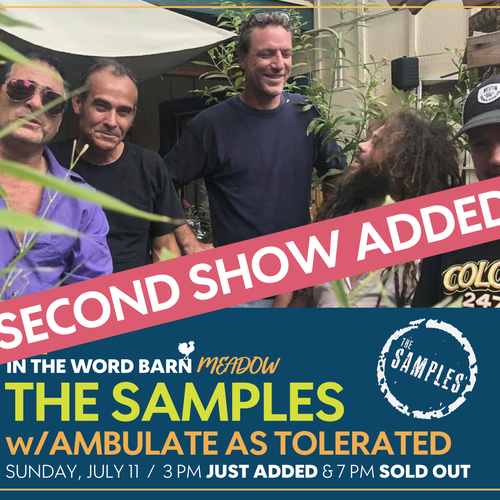 ﻿For many of us, The Samples helped define our youth with their reggae/ska feel, powerful lyrics and the amazing voice of singer Sean Kelly.

25 years after starting his full-fledged music career with The Samples, Sean Kelly continues to delight fans with music that transcends genres, age and shatters the rules of the established music industry. Throughout his career, Sean has been the driving influence of 20 albums and over 1 million records sold.

Sean started playing guitar at age 16 listening to Neil Young, Rolling Stones and Jackson Browne. Those influences mixed with his own poignant and timeless lyrics, a unique and striking voice and a mind for melodies led to songs like Little Silver Ring, Feel Us Shaking and Wild River. For many fans, these aren’t new songs or old songs, but anthems to their lives that represent the first time they met their wife or the joys of their times at college.

The Samples are more than a band – they represent a culture of fans and music that go beyond who happens to be playing in the band at any given time. There have been many members of The Samples, but Sean Kelly has been the consistent factor throughout all of the changes.

These five came together on the campus of Berwick Academy and have thrived together as musicians, playing their favorite covers from Bob Dylan to Gillian Welch, Wilco to Tom Petty as well as introspective yet catchy original songs written by Ryan Feeley.

AaT also invites special guests to join them such as Jeoff Jarnot on bass, Jon Wilkins on upright bass, Jamie Decato on drums, Kent Allyn on keys, and Ben Baldwin on hand drums and sax. These soulful folks rock their heartfelt music and you're guaranteed to enjoy.