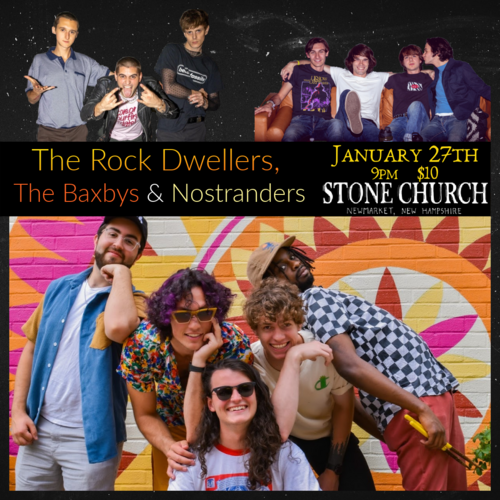 Long ago, atop a Rock in the woods, sat a community of friends and fools. As the community molded and grew, the form it took began to expand—from garages to basements to stages to headphones. The sounds it made shook the land, knocking laces from shoes and fear from minds. Soon the sounds left the outskirts, venturing far off into the world; toppling trees, rippling waters, and melting bullets into flowers. That community of which all was borne, was The Rock Dwellers.

﻿The Baxbys are an alternative rock band from Amherst, Massachusetts. Formed in 2021, the band is composed of lead singer and rhythm guitarist Alex Nordlund, lead guitarist James Miller, drummer Chris Scuicco, and bassist Spencer Rosenfeld. The band combines the sound of colorful guitar-driven instrumentals in their songs with vintage pop-rock lyrics and melodies

Nostranders are a modern surf/Post Indie rock band formed and based in New York CIty, NY. A trio, Nostranders features bass guitar and lead vocals from Christian Mckenzie, lead guitar from Jeff Allen, as well as drums and backup vocals from Lyle Rea. We get our name from the historic Brooklyn street that we share it with.