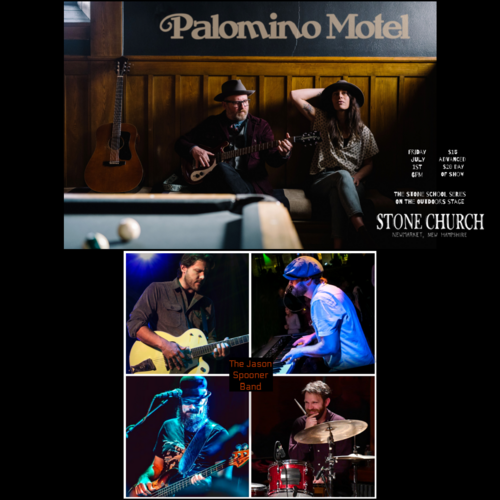 Portland, Maine based songwriter, guitarist and producer Jason Spooner has been a visible and respected presence on the northeastern and national live music circuits for close to two decades. As the bandleader of The Jason Spooner Band (Dan Boyden - Drums, Stu Mahan - Bass and Dawson Hill - Keyboards), Spooner has expanded his musical horizons significantly over the course of five studio releases. The quartet stands out with an interesting signature sound that appeals to a wide range of audiences... seamlessly blending a variety of musical influences into a cohesive, energetic and listenable experience. Roots Rock, Americana, blues, folk and groove-oriented jazz with undercurrents of reggae and soul are all accounted for here and supported by audibly strong musicianship, interesting arrangements and well-crafted, intelligent writing. The recipe has certainly served the band well; over the last decade and a half this dynamic band has performed with acts as varied as B.B. King, John Mayer, Jackson Browne, Michael Franti & Spearhead, Ray LaMontagne, Susan Tedeschi, Brett Dennen, Allen Stone, Everlast, Jackie Greene, G. Love, Guster, Blues Traveler, Peter Rowan and Sara Bareilles. The band has performed at Targhee Fest in Jackson Hole, WY - The Gathering of the Vibes in Bridgeport, CT - FloydFest in Floyd, Va - The Festival at Sandpoint - Sandpoint, ID - The Naukabout Festival on Cape Cod, the River City Roots Festival in Missoula, MT - The Rocky Mountain Folks Festival in Lyons, CO and have been perennial favorites at The Sundance Film Festival in Park City, UT. In addition to glowing recent press in Guitar World Magazine, No Depression, High Times Magazine, Wood & Steel Magazine and USA Today, the band was recently named one of Relix Magazine’s coveted “On The Verge - Bands you should know.” The band has won and received numerous nominations for the New England Music Awards including Live Act of the Year (winner) and Song of the Year (nominee). The spring and summer of 2022 represent an exciting watermark in the band’s evolution as they release their first live record, “Live from Stone Mountain.” The eleven tracks selected for the album were recorded at Stone Mountain Arts Center in Brownfield, Maine where Jason and the band have delivered some of their most memorable live shows. The Spooner Band decided to start documenting the consistently engaging performances a few years back and spent the winter of 2022 combing through the archives to select the tracks that best conveyed the magic of the legendary and storied venue. The venue is housed within a unique timber frame barn next to a 200 year old farm house where songwriter Carol Noonan and her husband Jeff Flagg reside. The venue was a dream that they made into a special reality over two decades ago. Since opening, Stone Mountain Arts Center (or “SMAC” as it’s known to locals) has hosted a who’s who of roots, Americana, folk, jazz and soul artists ranging from Taj Mahal, Lyle Lovett, Brandi Carlile and Los Lobos to Mavis Staples, Aaron Neville, The Wood Brothers, Martin Sexton and Mary Chapin Carpenter. “We had talked about a live record for years and every time the idea surfaced again, we all agreed that Stone Mountain was the place. There is such a palpable, warm energy to the venue and everything about it makes musicians feel at ease… it always felt like coming home to us. The room also just sounds incredible. I used to think it was due to the wood but there’s something deeper going on - more of a spiritual thing honestly. Everything we do up there sounds its best on that stage. We’ve done robust band arrangements with full horn sections doing high energy R&B or roots rock numbers that came out wonderfully and we’ve also had pin drop silence moments playing hushed acoustic material.” Spooner goes on to reflect on the venue’s unique location, “I love the fact that it’s so tucked away in the foothills of the White Mountains and that there’s really no cell service out there. I used to get lost trying to find it when we started playing there. You immediately unplug from the fray and mayhem of daily life. The green room is like the ultimate musicians’ oasis complete with tons of vinyl and a turntable, comfy couches everywhere, a pool table and tons of memorabilia. The food is also out of this world… Carol and her staff always deliver the most memorable meals to both the bands and the audiences.” The Jason Spooner Band will be touring throughout the Northeast for the next several months in support of the new record and will also be releasing new studio material in 2022. Jason is officially endorsed by Gretsch Guitars, Taylor Guitars and Fishman Acoustic Electronics.

Spencer Albee-Vocalist, songwriter, multi instrumentalist, producerNatalie Mishell- Vocalist, songwriter, guitarist, co-producerPalomino Motel, the new double lead vocal, soulful and slightlypsychedelic Americana country-rock band from Portland, ME, is acollaboration between Natalie Mishell and Spencer Albee. Bouncingbetween Spencer’s home studio and working with producer/engineerJonathan Wyman, Palomino Motel has been busy finishing their debutalbum, slated for release in late 2022. The first single “Make Thie Easy” willbe released in April of 2022Spencer Albee is a Portland based musician and producer who has maderecords with David Bowie, Tony Visconti (T. Rex, Bowie), David Leonard(Prince, Toto) and Matt Wallace (Faith No More, Maroon 5), Amy Allen andThe Ghost of Paul Revere. As of Jan 2022, he has released over 20 studiorecords and has signed recording and publishing contracts with Arista,Tommy Boy, A&M, EMI and Zomba. He has toured extensively sharingstages with artists including De La Soul, OAR, The Wonderstuff, Joan Jett,OK Go, Roger Clyne and the Peacemakers, Steel Pulse, Dr. Dog, 311, andButch Walker, among many others.Natalie Mishell was born and raised in sunny southern California. For mostof her younger years, she worked in film, TV, and commercials beforemoving from Los Angeles to New York to pursue her music career. In 2010,she released the EP, “In My Shoes” (produced by Rich Pagano), followedby an East coast solo tour and the 2011 single, “Sunshine”. Nataliereleased her first full-length record,”Goodnight Stranger” (produced by J.PBowersock,The Strokes, Ryan Adams) and toured nationally as NatalieMishell & Company. In 2019 she appeared at the Ladybug Festival (thelargest all female festival in the country) took a European tour, andreleased her second full length record “The Box'' gaining significant buzzwith over a million streams on Spotify. She now resides in Portland, [email protected] on Instagram