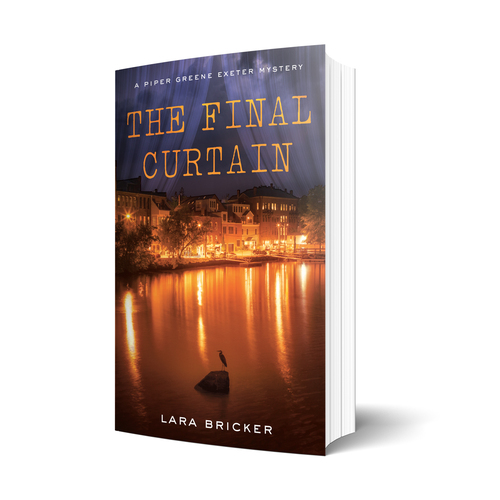 Join us in The Word Barn Meadow for the launch of Lara Bricker's new book, The Final Curtain - the much-anticipated second entry in the Piper Greene Mystery series, set in historic Exeter, NH, with a quirky cast of characters and a spunky reporter who keeps finding herself in the middle of murders.

When local reporter Piper Greene gets an invitation from Harry Trott, the reclusive bird man of Exeter, to meet him for an early morning interview, she can’t resist. But when she arrives, she finds a murdered body and no sign of Harry. The body belongs to Roy Carmichael, who wanted to build a Revolutionary War-themed arcade on the lot once home to the prestigious Exeter Playhouse, destroyed by a suspicious fire 50 years ago. Opposition to Roy’s plan was huge . . . but was it fatal?

Despite warnings from the exasperated police chief, who’s still salty about her past sleuthing, Piper is determined to uncover the truth, but once again her investigation hits some major roadblocks. With rising tension between her new beau and her clueless colleague, plus a flashy suitor in hot pursuit of her Aunt Gladys, she struggles to balance it all, including coverage of the town’s annual Beer and Chili Festival.

Lara Bricker is an award-wining journalist, podcaster, former private investigator, certified cat detective and true crime author. She is one of four crime writers on the hit podcast, Crime Writers On, and the author of the true crime book Lie After Lie: The True Story of a Master of Deception, Betrayal and Murder. Dead on Deadline, the first book in the Piper Greene Exeter mysteries, was the best-selling book of the year at Water Street Bookstore in 2021.

Lara is a longtime resident of Exeter New Hampshire where she can often be found walking around town pondering where her next murder mystery will take place.

With help from the town historian, her aunt and Harry’s 92-year-old neighbor, Piper quickly begins to piece together Roy’s past. But as she soon discovers, there’s no shortage of possible suspects—and she’ll even have to rule out her own brother.