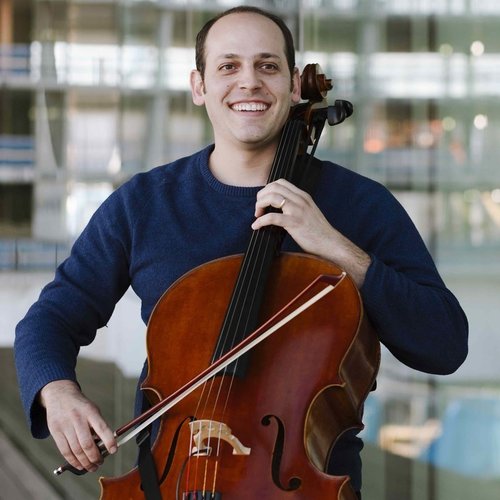 MIKE BLOCK is a pioneering multi-style cellist, singer, composer, and educator, hailed by Yo-Yo Ma as the "ideal musician of the 21st-Century", and acclaimed by the NY Times for his "vital rich-hued solo playing". While still studying at the Juilliard School, Mike joined Yo-Yo Ma’s Silk Road Ensemble, with which he has toured extensively throughout the world, and won a 2017 Grammy Award for Best World Music Album. Mike is also an active recording artist of original material, folk music, cross-cultural collaborations, and he has an ongoing project to record all of the Bach cello suites in acoustically glorious bathrooms of famous concert halls, via BachInTheBathroom.com. As one of the first wave of cellists to adopt a strap in order to stand and move while playing, Mike was the first standing cellist to perform at Carnegie Hall, using a cello strap of his own design, called the Block Strap, a performance which the NY Times called "Breathless ... Half dance, half dare."

As a music educator, Mike is passionate about emphasizing creativity and collaboration, leading to the founding of the Mike Block String Camp in 2010. MBSC provides players of all backgrounds the opportunity to learn from a world-class faculty in a variety of styles, and supports the exploration and development of the artistic voice of each student. Mike is also the founding Director of the Silkroad Global Musician Workshop, bringing together musicians from around the globe, and he created the online Multi-Style Cello School at ArtistWorks.com, with an extensive library of instructional videos. In 2012, Mike was appointed Associate Professor at the Berklee College of Music. Mike lives in Boston with his wife, fiddler Hanneke Cassel.

Mike’s television and radio credits include "Late Night with Conan O’Brian", "Regis and Kelly", NBC’s 30 Rock, NPR’s "St. Paul Sunday Morning", WNYC’s "Soundcheck", APM’s "Performance Today", WNBC 4’s Chuck Scarborough Show, VH1, The Disney Channel, and the CBS "Early Show". When still living in New York City, Mike regularly subbed on Broadway as on-stage cellist for the Pulitzer Prize winning musical, "Next to Normal", and he also worked as Music Consultant on the 2012 film, "A Late Quartet". Mike was the subject of a 2011 feature article in the Wall Street Journal for his Artistic Directorship of the GALA BROOKLYN Music Festival, featuring cross-cultural collaborations among locally-based musicians.

Mike attended college at the Cleveland Institute of Music, where he studied cello with Richard Aaron, and received the Jim Hall Prize for Undergraduate Achievement. Mike also earned a Master’s Degree from the Juilliard School, where he studied with Darrett Adkins and Joel Krosnick. These days, Mike plays on a modern cello made in 2014 by Fabienne Gauchet, D’Addario strings, a David Gage Realist pickup, and the patented cello strap of his own design, The Block Strap.

***Due to social distancing requirements, these events will have limited seating and tickets must be purchased in advance. Bring your blankets or folding chairs! We will have designated spots on the lawn for each group of 5 people max. Please wear masks until you are seated.

In the event of inclement weather, the concert will be rescheduled. We kindly ask that those who need to cancel their reservation, please email prior to the start of the event so those on the wait list have the opportunity to take your spot.