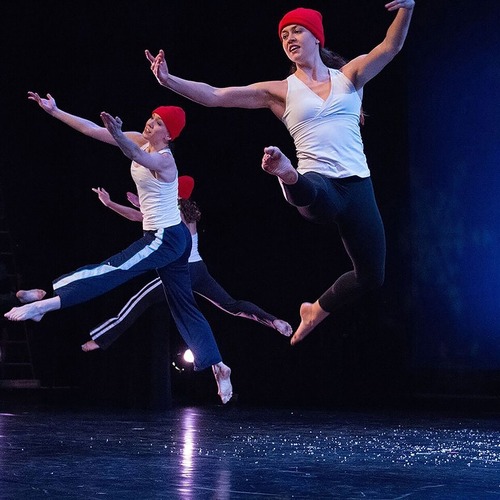 David Parker’s Bang Group first brought the house down with their performance of Nut/Cracked at The Dance Hall in 2016. This hilarious rendition of the storied holiday production is performed to perfection by a company of exquisitely trained artists.

It’s The Nutcracker, but definitely not as we know it. The Bang Group has taken every little girls favorite Christmas show and torn it limb from limb. Mixing Tchaikovsky’s original score with music by Duke Ellington, Glenn Miller and others, the company turns the sugar coated ballet into a percussive piece of dance theatre. Expect tap dancing, singing and some unusual pointe shoe activity. Nothing is sacred as Nut/Cracked twists and melds various dance traditions into an ode to American eclecticism which honors the power of the human urge to dance while riding Tchaikovsky’s voluptuous waves of rhythm.

The Bang Group’s mission, based on choreographer David Parker’s vision of diverse dance forms united by a common purpose, is to facilitate the creation and performance of Parker’s work and to promote, mentor and present the work of artists who embody this vision. Standards of craftsmanship, creative liberty and aesthetic diversity are present in the rehearsal and mentoring process, in the curation of the company’s performances and those presented by The Bang Group at venues throughout the U.S. and Europe.

The Bang Group, a rhythm based, theatrical dance company based in New York City, incorporated as a non profit in 1995. TBG has been presented in NYC by Danspace Project, Dance Theater Workshop, New York Live Arts, Symphony Space, and DanceNow/NYC at Joes Pub at the Public Theater. Through The Bang Group’s 13-year relationship with Summer Stages Dance in Concord, Mass., it also enjoys a sustained presence in Boston through performances on First Night Boston, at The Out On The Edge Festival at the Boston Center for the Arts and through extensive teaching and mentoring of Boston area dancers and choreographers.

Tickets are $30 Adults; Seniors and Children $25