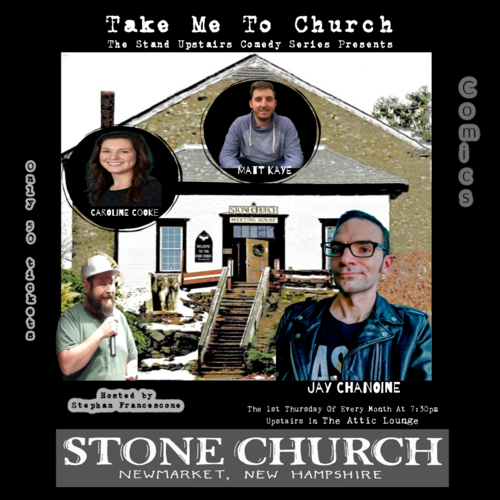 Matt Kaye is a rising comic in the Boston comedy scene. Refusing to allow Covid to cancel his comedy career (unlike his wedding), he worked hard during the pandemic, expanding his act and his waistline.

With a background in finance/accounting, he spends his mornings tracking financial markets and his days blowing through his Weight Watchers points by lunch.

Matt was recently a finalist in the Boston Comedy Festival and regularly performs at clubs and theaters all around New England including the Comedy Studio and ImprovBoston.

Caroline Cooke is a Boston-based standup comic who blends social commentary and storytelling to deliver big laughs about the absurd nature of our society and daily lives. Caroline was featured in the Burbank Comedy Festival, is a three-time gold medalist in the Quadrennial Comedy Games, and performed in the Last Comix Standing at the Mohegan Sun in June. Caroline performs at popular comedy clubs across New England and New York City, including West Side Comedy Club, The Comedy Studio, Off Cabot, Broadway Comedy Club, QED, and Greenwich Village Comedy Club. She also performs at corporate, charity, and private events.

Jay Chanoine is a nationally touring comedian whose style has been described as "the comedic equivalent of a toy car that you pull back, then watch it zip out of control and wonder where it will end up." He is a frequent member of The Altercation Punk Comedy Tour, a contributing writer to satirical humor site The Hard Times, and a recording artist for the Stand Up! Records label. His most recent album (2019’s The Texas Chanoinesaw Massacre) was produced by Grammy award winner Dan Schlissel. It debuted at the top of both Amazon and Apple Music’s comedy charts and can be heard streaming on SiriusXM Satellite Radio.

Named "The Funniest Comedian You Don't Know Yet" on AXS, Jay's high energy performances have been seen opening for national acts like Kyle Kinane, Eddie Pepitone, Myq Kaplan and Sam Jay. He has also been featured at a variety of comedy and music festivals including The Altercation Comedy Festival in Austin, Texas and Pouzza Fest in Montreal. He is currently working on his next album for Stand Up! Records, planned to be recorded in 2022.