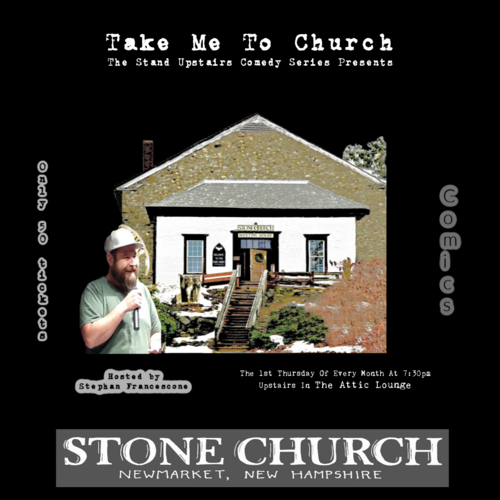 Laughter is good for the soul and they say so is church, so what better place to see some of the best New England comedians and feed your soul than at the historic Stone Church Music Club

The Standupstairs series is sure to keep you laughing and feeling good!

Set in historic Newmarket, The Stone Church has completely renovated their attic space to feel like you’re enjoying some of the best comedy New England has to offer from your own living room!

Couches, oversized chairs, tables, a full service kitchen and bar will make you feel at home while you laugh your a$$ off the first Thursday of every month!

A veteran of the Boston comedy scene, Sheehy has appeared at Nick’s Comedy Stop, Giggles Comedy Club, The Boston Comedy Company and at corporate shows, clubs and bars all over the East Coast. He has a laid-back, everyman style and spins jokes about married life and being a father in modern-day America. He has worked with Bob Marley, Steve Sweeney and Lenny Clark.

Tony Moschetto has written many bios throughout his life. In them, he lists accomplishments, like being a comedian and performing comedy all over America and in London, Beijing, and Shanghai too! And writing for stage and screen, being an award-winning filmmaker, and this and that.

But did you know some of his lesser-known accomplishments? - Finished 101st (last place) at the 2000 Topsfield Fair Giant Pumpkin contest.

-Traveled across the USA three times.

-"Kinda" broke the hip of the man who invented the whiffle ball while playing tennis. And so on.

In his spare time, Tony likes to read and play tennis, but not at the same time.

Frank is an Italian-American who is best known for playing the recurring role of “Georgie the Bartender” in The Sopranos. Frank is also well known for his star role in The Godfathers of Comedy. Frank has starred in numerous movies, including No Reservations, Meet the Parents, and Crooked Lines.

Nationally known in more countries than Slovakia, Santorelli has been a headliner at some of the world’s most famous comedy clubs, with venues such as Catch a Rising Star, The Improv, and Caroline’s on Broadway. And Mr. Santorelli, appearances on the big screen (he needs one) include “Johnny Slade’s Greatest Hits”. “Crooked Lines”, and “Meet the Parents.” But did you know that Frank Santorelli has appeared on over 21 television shows, besides, The Sopranos where he plays the lovable character of “Georgie, the Bartender.” Frank has also done commercial’s for some of our favorite products, Olive Garden, Coor’s Beer, and Mc Donald’s.