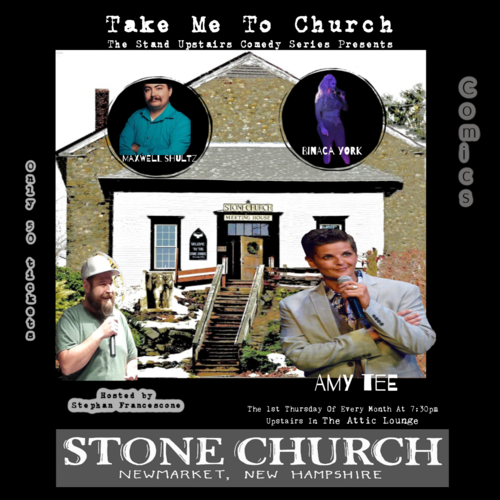 Laughter is good for the soul and they say so is church, so what better place to see some of the best New England comedians and feed your soul than at the historic Stone Church Music Club

The Standupstairs series is sure to keep you laughing and feeling good!

Set in historic Newmarket, The Stone Church has completely renovated their attic space to feel like you’re enjoying some of the best comedy New England has to offer from your own living room!

Couches, oversized chairs, tables, a full service kitchen and bar will make you feel at home while you laugh your a$$ off the first Thursday of every month!

Maxwell Shultz a Boston based comedian of eight years, telling jokes about real life and observational obscurity. My first album, You Can Call Me Dad, was released October 22nd 2020 and is recording a follow up in November of this year. He has also been a DJ on WUML for the past 9 years, interviewing performers of all spectrums and walks of life. He runs the production company, Malice Comedy.

Maxwell Shultz is a comedian from North of Boston who brings delight to audiences far and wide. His real world humor is relatable to most any audience.

Binaca York is a skyscaping Drag Queen from Maine/New Hampshire. She started her Drag career in Portland Maine back in 2016. She is known for her stunning makeup, lip sync performances, resting bitch face and outrageously funny comedy/ hosting skills. Bianca’s sense of humor is derived from a lack of sleep, burning the candle at both ends ;) ;) and being a Queer Icon in small town. Bianca hosts Drag Shows and other LGBTQIA+ events in the local Seacoast New Hampshire area, if you’ve never been to a show….Just do it. This will be Bianca's first time ever doing a stand-up act, hopefully she breaks a heel. But she will also leave Audiences thinking….Is that really what she thinks about while she is bored?

“Not every crazy looks crazy,” says Amy Tee, the comedian and motivational speaker who brings her boyish charm and dry wit to the stage with a storytelling style that shifts between stereotypes and reality. Through a ton of hard work and self-discovery,Amy delivers comedy with stigma-busting honesty. "I feel alive," she says of the work. "I’m candid and exposed yet still fully clothed.

Identified by the Boston Globe as a comedian to watch, and in Curve magazine as one of the "funniest lesbians in America," Amy toured nationally and was a featured comedian in the film, Laughing Matters-The Next Generation.

As an official IOOV (In Our Own Voice) Presenter for National Alliance on Mental Illness (NAMI), Amy Tee proudly uses her comedy act to serve as a mental wellness advocate.

She remains a fixture on the comedy circuit, as a regular performer at the Boston Comedy Festival, and also featured on Sirius XM Satellite Radio & LOGO television network