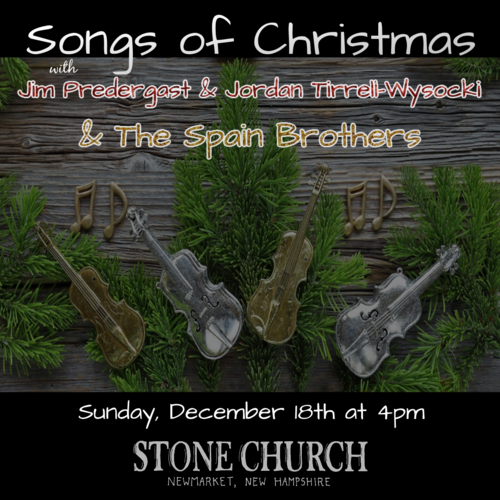 For over 8 years until the pandemic, Jim Prendergast and Jordan Tirrell-Wysocki held forth on Thursday nights at The Stone Church, providing an authentic Irish pub-style show that welcomed guest musicians and was friendly to all ages. Both full-time musicians, Jim brings many decades of experience working with the best of the best in the Nashville music scene, while Jordan has been hailed as “one of the state’s favorite musicians” by NH Chronicle, and was named a Master Artist by the NH State Council on The Arts. Their blend of cheerful sing-alongs, haunting ballads and lively fiddle tunes is ever-changing and often guided by audience requests. Join us for the special matinee version of Irish Night, Christmas Song style.

Manchester, NH. They grew up in a household steeped in folk music and musicians. Their

throughout the New England area. Mike, not only inspired the boys to perform, but he

introduced them to the work of a myriad of artists, and educated them on the folk song

tradition and its importance in society.

them a very sought after act and led to the recording of two CD’s. On one fateful night, the

sets of brothers, quickly formed a bond over their shared love of the music and in 2002,

Liam and Mickey joined forces with Shane, Conor and Rory and began touring as The

States, up into Nova Scotia, on Caribbean cruises and across the sea to Ireland. They

recorded four cd’s along the way, and shared the stage with some of the greatest in the

business. After years of touring, the lineup was reduced to four but the act continued on

without missing a beat. In 2011, an idea suggested by Liam a few years prior, became a

Sessions, Volume ll. This project brought the brothers together to record with folk icons

to name a few, and it gave birth to an annual concert held in Liam and Mickey’s hometown,

In 2013, the lineup, again, was reduced by one, leaving Liam, Mickey and Rory to perform

as the trio Makem and Spain. Although the new lineup continues to tour and promote their

latest cd offering, Four Pounds a Day, Liam and Mickey have returned to performing as a

duo, concentrating on original compositions as well as traditional and contemporary folk