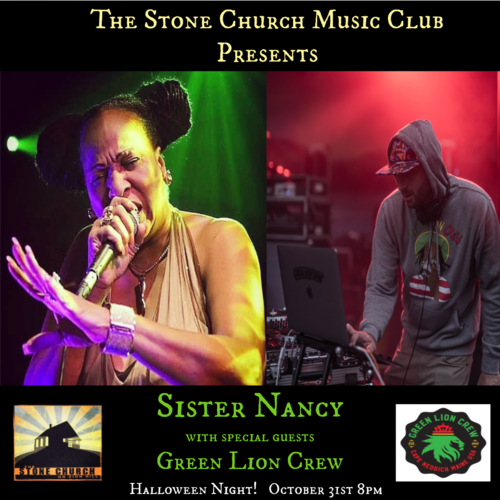 For a Halloween Dance Party! This is going to be a really great vibe, high upon Zion Hill!

Sister Nancy, aka Muma Nancy, real name Ophlin Russell-Myers, (born Ophlin Russell, 2 January 1962, Kingston, Jamaica) is a dancehall DJ and singer. She is known to the world as the first female dancehall DJ and was described as being a “dominating female voice for over two decades” on the dancehall scene. One of her most famous songs is “Bam Bam”, labeled as a “well-known reggae anthem” by BBC and a “classic” by The Observer. Russell-Myers was one of 15 siblings. Her elder brother, Robert, is better known as Brigadier Jerry, and by her mid-teens, she would occasionally perform on the Jahlove Music sound system that he worked with,[4] and worked for three years on the Stereophonic sound system with General Echo. In 1980, producer Winston Riley was the first to take her into the studio, resulting in her first single, “Papa Dean” for his Techniques label.

Russell-Myers went on to perform at Reggae Sunsplash, making her the first female deejay ever to perform there, and she is also the first female Jamaican deejay to tour internationally. She had further success with singles such as “One Two”, “Money Can’t Buy Me Love”, “Transport Connection” and “Bam Bam”. Her debut album, One Two was released in 1982. She went on to work with producer Henry “Junjo” Lawes, recording “A No Any Man Can Test Sister Nancy”, “Bang Belly”, and a collaboration with Yellowman, “Jah Mek Us Fe A Purpose”. She continued to appear live, sometimes on Jahlove Music with her brother.

The sound system toured internationally, with both Sister Nancy and Brigadier Jerry making their debut UK performances at the Brixton Town Hall, London in 1982. In 1996, she relocated to New Jersey. In an interview with The Jamaica Observer in 2002, Russell-Myers said that although she was working in the banking sector, that “music is [her] first love” and said she still performs “every now and then”. She explained that her absence from the recording scene was due to her wanting to “give other female artists a chance”, though she said she was still “as ready as the first day [she] came into the business”.

Sister Nancy has recently been getting alot of work in diverse places with live bands and with track shows. She has raw talent that is being appreciated as she continues to work hard on the front line.

From an early age, Green Lion Crew’s Zeke Stern and Dana Knowles became students of the sounds of Caribbean Culture. After originally starting as a band, they began DJing in the early 2000s after creating an obsession with Jamaican sound systems. Before long, the two decided to pursue the art of music production under the name Green Lion Crew, committing to give back to the music they loved so much.

The US based producers traveled frequently to Jamaica and the Virgin Islands to master their craft. Their pursuits and passion for the music lead Stern and Knowles to collaborate and become friendly with massive stars in the reggae genre including Collie Buddz, Chronixx, Kabaka Pyramid, Beenie Man, and more. The duo’s lofty ambitions and consistent independent releases fuel their efforts to stay on the cutting edge of modern reggae’s sharpest performers. Stern and Knowles draw from their crate digging days, creating a niche sound by intertwining the classic sounds of reggae and dancehall with the youthful energy of hip hop and EDM.

Though their productions are born under a unique vision, the true thrill of Green Lion Crew’s music is in their live performance. In true fashion of the sound system culture, Green Lion Crew captures the audience with their addictive beats and rhythms, often having a guest vocalist double as the emcee and toastmaster. They have opened for artists like Stephen Marley, Lee “Scratch” Perry, and John Brown’s Body to name a few. Their live performances pump adrenaline through the veins of their venues from the first drop of the beat to the last crash of the cymbal at the end of the night.

Since their inception, the music of Green Lion Crew has been heard on ESPN, Vice TV, and the X-Games. The group has been supported by tropical tastemakers like Walshy Fire of Major Lazer, David Rodigan from BBC 1xtra, and Protoje’s DJ, Yaadcore from Jamaica. Back home in the States, the group has maintained a weekly reggae radio show and has received relentless support from local media outlets WXGR, WUNH, and Gatehouse Media.

Green Lion Crew not only promotes appreciation of the reggae culture, but is committed to sharing their love for the genre with listeners across the world.

Proof of vaccination, or proof of a negative PCR COVID test within 72 hours of the event, is required for entry into indoor ticketed events if social distancing can not be met. Masks remain strongly encouraged (when not eating or drinking), but are not required inside the Performance Space. Due to the COVID-19 pandemic, the advertised date of a performance is subject to change as we abide by local and federal guidelines. Due to social distancing guidelines your seat choices may be modified and we will do our best to accommodate you. Original tickets will be valid for any rescheduled date or reissued. If you are a ticket holder unable to attend a rescheduled date, there are no refunds; however, exchanges will be available through [email protected]