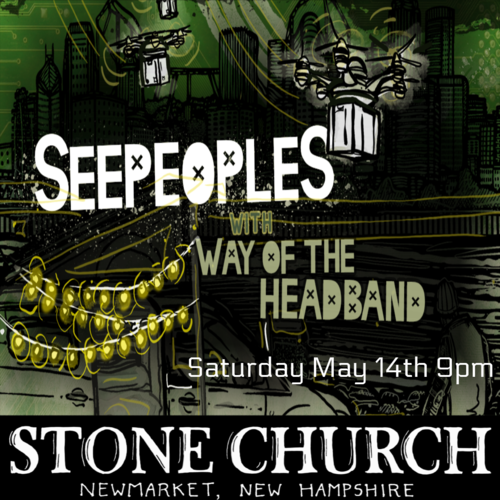 The anti-genre indie pranksters SeepeopleS have been a band for 21 years. The band, which is the brainchild of bandleader/songwriter/producer Will Bradford, has released 5 full length albums and 2 EPs on their own imprint, RascalZRecordZ. It would be an accurate statement to say that there isn't a single band on the planet that covers as much ground musically, or traverses through as many musical universes as SeepeopleS does. Musicians have long since taken notice and members of Morphine, Spearhead, Dave Matthews Band (Tim Reynolds), and even members of Parliament/Funkadelic  are featured on previous albums. All seven records were co-produced by Will Holland (Pixies, Fall Out Boy, Dead Can Dance) As far as "hype" goes, the band was recently nominated for "Best Live Act" for the 2016 New England Music Awards. Other nominations include "Best New Artist" (Relix Magazine Awards 2007).The band has shared the stage and toured with such acts as Death Cab for Cutie, Franz Ferdinand, Cracker, De La Soul, The Pharcyde, Ben Harper, Kula Shaker, Presidents of the United States and have even had Jon Fishman (Phish) join the band for a SeepeopleS set during a Bernie Sanders rally. They have been featured in Paste Magazine, Datyrotter, Pop Matters, Magnet, Exclaim, High Times, Relix. DRUM Magazine, Blue Walrus and Daytrotter, to name a short few. Their music has been used on Judging Amy (TNT), The Gates (ABC), and in feature films such as 'Canvasman,' and 'Wheels Over Paradise,' as well as on the Discovery Channel and NASCAR broadcasts. They provided most of the music for the Headcount (voting registration) documentary 'Call To Action' and have played CMJ, SXSW, as well as having played major music festivals such as Wakarusa, Trinumeral, Bear Creek, Smilefest and Allgood Music Festivals. In 2017 SeepeopleS released the "New American Dream" music video animated by Pete List (Celebrity Death Match/MTV, Marilyn Manson). The video would end up being nominated for "Best Video" for the Independent Music Awards in 2018, and won a Pixie award for the animator for "Best Short Video," in the same year. Also in 2018, unfortunately, Facebook and Instagram banned the video and removed the video from their platforms, sealing the band's place forever as a true underground cult favorite and confirming their role as artistic provocateurs. Currently SeepeopleS is gearing up for the release of their eighth studio release entitled Field Guide For Survival In This Dying World (RascalZRecordZ 2022). The album features musical contributions from Dana Colley (Morphine, VOM), Tim Reynolds (Dave Matthews Band), Nikki Glaspie (Beyoncé, The Nth Power), Jerome Deupree (Morphine) Jason Ward (Rustic Overtones), Sparxsea, Brooke Binion (theWorst), Cowboy Eddie Long (ZZ Top), Devon Colella (QUAD) and Nate Edgar (The Nth Power, John Brown's Body) to name a short few and is scheduled to drop on OCT. 7, 2022. For more info and all links, tix, etc, please visit:

about Way Of The Headband

Way of the Headband was born under a covered bridge, by a brook and a cackling fire. It was in the forests of New Hampshire, when they were just Headband, that the way began to take shape and the sounds and words they heard in their heads sounded like something the world needed. So they heeded the call. Now they spread the word of rock and roll, for young and old. Way of the Headband recently added a fifth member, Mr. Rafe Matregrano and became a star of musical expression, a real cosmic roll of rocking. Some may say their sound starts its vibrations upon the frequency of instinct and winds its way up the spine into something akin to a spiritual experience. Others may say that they wake in the morning with WOTH songs echoing through their heads like errant dreams only to be relieved by a sound listening. Any way you look at it (or listen), WOTH will make its way into your head. WOTH used to be a rocking trio but then we added a fourth member, and this year a fifth. The new energy provided by MC and Riff Rafe have brought forth the true power of the Way. Hear Adam, Orion, Andrew, Marshal and Rafe on the newest Way of the Headband album ROGUE ISLAND, out now! For more info please visit: