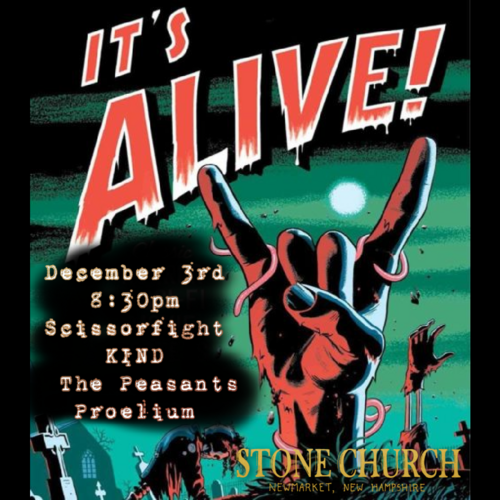 Hailing from the darkest depths of the northern New England woods, Scissorfight exists to lay down the heaviest of grooves, riffs, and volumes. Scissorfight has been around for hundreds of years in different formations. Its current and sexiest lineup includes Doug Aubin on vocalizations, Rick “Stixxx” Orcutt on thunder tubs, Paul “Jarvis” Jarvis on the lowest of strings, and Jay “Octocock?’ Fortin on the higher six-stringer. Scissorfight has released a lot of music over the years, the most recent being the much celebrated and ballyhooed “Doomus Abruptus, vol. 1. A crusher of an album. Said to be leading the charge in construction metal, speed doom, nuisance metal, blackish {more dark brown} metal, and of course potcore, they fly these freak flags with aplomb! Scissorfight live shows are a mix of riffs, volume, and beer. Possibly hay. Other antics may also ensue. Also fun. Please enjoy Scissorfight responsibly with much alcohol, pot, and maximum volume.

KIND, the stoner/psych/doom supergroup from Boston, are back with their second full-length, “Mental Nudge”. Featuring members Matt Couto (ex-Elder), Tom Corino (ex-Rozamov), Craig Riggs (Roadsaw) and Darryl Shepard (ex-Black Pyramid), KIND formed in 2013 and released their debut album “Rocket Science” on Ripple Music in the waning days of 2015. That album garnered favorable reviews across the board, including from Metal Hammer who stated that it built up “an atmosphere that’ll sound awesome played live”. That was proven by a West Coast tour KIND undertook with Ripple labelmates Salem’s Bend and a live appearance at Desertfest London in 2018, as well as many shows throughout the Northeastern U.S.

After entering the studio a couple of times in the intervening years to demo new material, KIND booked time at the venerable Mad Oak Studios in January 2020 with Alec Rodriguez (Lesser Glow, Forn, Chelsea Wolfe live sound) behind the boards once again to track “Mental Nudge”. Staying true to their sound but expanding their sonic palette at the same time, KIND has crafted seven songs that cover the aural spectrum, from the indie-rock influenced “Helms” to the full-on doom of “Trigger Happy” to the rock bombast of “Broken Tweaker”. Rodriguez once again deftly managed to capture the interplay between the instruments and the powerful vocals of Riggs, resulting in a clear yet heavy recording of the new material.

The Peasants are a Boston Based Rock Trio begun in 1987 when Pete moved from NY and spent 3 years playing in the subways and streets of Boston. Many styles but rip roaring garage rock is easiest to say. We've toured all of the US in 1997-1999, around the time we met Scissorfight. We've also toured in Europe about 10 ties between 2000-2015. We have 5 albums and maybe a sixth some day soon. You can find us on Bandcamp. Look for The Peasants from Boston. Accept no other. See you soon!

Proelium Born in a basement somewhere in New Hampshire, Proelium are an Alternative Metal band with influences ranging from modern rock to in your face metal. Formed under multiple prior names and projects, founding members Jake Russell and Darius Yeager have written and recorded together since 2017, developing their sounds individually resulting in the 2021 EP "Slipped Under" and the 2022 single "I Hope You Know". Members Leo Ganley, Nick Badjer and Ed McPherson complete the outfit bringing you a 5 piece metal show sure to cause some chaos.