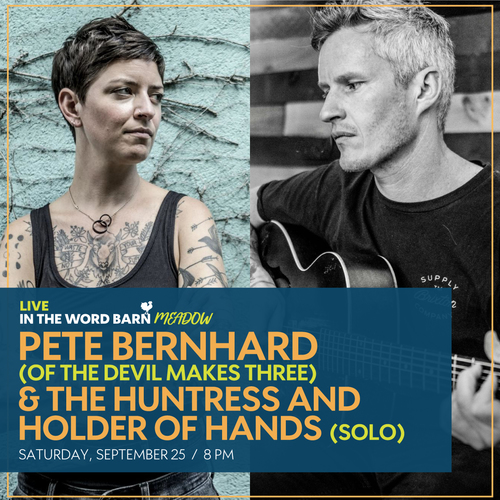 Pete Bernhard is the singer and main songwriter for the band The Devil Makes Three and has been touring the US, Canada and Europe for nearly 18 years. He hails from a small community in southern Vermont with a family rife with musicians. His father was a singer and songwriter, his brother attended Berklee School of Music, and his aunt was a local folk musician. Immersed in music at a young age, he was drawn to older, traditional finger picking blues and folk music.

In 2001, Pete headed to Washington State, where he formed a duo with a childhood friend Cooper McBean and began touring the west coast. When they broke down in Santa Cruz, California, they stayed with a fellow Vermonter Lucia Turino who was attending college at the University Of Santa Cruz and the band– The Devil Makes Three was born. Pete has three solo records released on his own label Kahn Records and many more with The Devil Makes Three.

The Huntress and Holder of Hands released their first LP, Avalon in 2017. A new album is currently in the works.