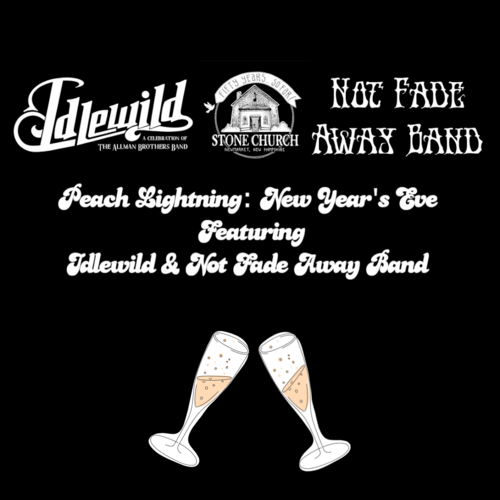 Idlewild: A Celebration Of The Allman Brothers Band

Not Fade Away Band

Join us as we say goodbye to 2022 and ring in the new year with an evening of Allmans and Dead tunes.

IDLEWILD: A CELEBRATION OF THE ALLMAN BROTHERS BAND

With a primary focus in excellence, Idlewild: A Celebration Of The Allman

The Allman Brothers Band were more than just a band... they were a phenomenon. The

creations of Gregg, Duane, Dicky and their bandmates have artistically inspired people

chapter has come to a close.

and Brandon Hill. The band are long time Allman fans with the goal of igniting the

listeners passion for the music by moving the music forward creating a fresh, exciting

Founded in 2019, Idlewild: A Celebration Of The Allman Brothers Band have since

established themselves among the area’s premier tribute acts. Rooted in rock, and

Band’s robust career, from the early days at The Fillmore East with Duane Allman, to

their modern era of Warren Haynes & Derrek Trucks. The band puts a focus on melding

music from across the Allmans career with intricate jam stylings creating that fresh,

NOT FADE AWAY BAND

a New England based improvisational band, is a skilled group of musicians with decades worth of cumulative gigging experience brought together by a mutual love for the music and culture of the Grateful Dead.

NFAB strives to bring their audiences high energy, danceable versions of their favorite songs. Each show is a unique experience with a mix of Grateful Dead along with covers from various artists and select NFAB originals. Every song is played in our own style with soulful vocal harmonies and psychedelic improvisational jams.

Having performed at venues and festivals all over the region, NFAB has gained a “deadicated” following with whom they continue to celebrate the unique relationship between the music, the culture, the musicians, and the fans. You know our love will not fade away!