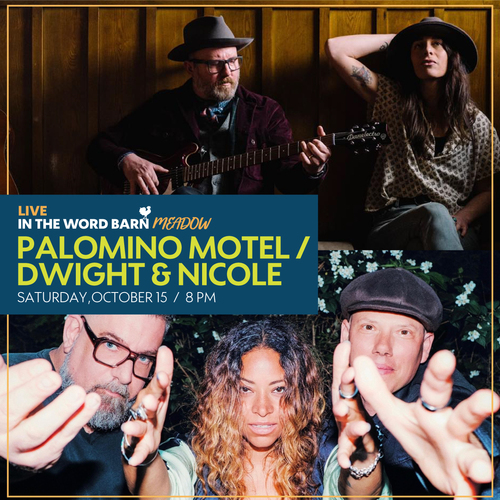 Palomino Motel, the new double lead vocal, soulful and slightly psychedelic Americana country-rock band from Portland, ME, is a collaboration between Natalie Mishell and Spencer Albee. Bouncing between Spencer’s home studio and working with Jonathan Wyman, Palomino Motel has been busy finishing their debut album, slated for release in late 2022. The first single “Make This Easy” will be released in April of 2022Spencer Albee is a Portland based musician and producer who has toured extensively sharing stages with artists including De La Soul, OAR, The Wonderstuff, Joan Jett, OK Go, Roger Clyne and the Peacemakers, Steel Pulse, Dr. Dog and Butch Walker and has made records with David Bowie, Amy Allen, The Ghost of Paul Revere, Spose, Tony Visconti (T. Rex, Bowie)i, David Leonard (Prince, Toto) and Matt Wallace (Faith No More, Maroon 5). As of Jan 2022, he has released over 20 studio records and remains the highest selling local artist in the history of the Bull Moose record store chain.

Natalie Mishell was born and raised in sunny southern California. For most of her younger years, she worked in film, TV, and commercials before moving from Los Angeles to New York to pursue her music career. In 2010, she released the EP, “In My Shoes” (produced by Rich Pagano), followed by an East coast solo tour and the 2011 single, “Sunshine”. Natalie released her first full-length record,”Goodnight Stranger” (produced by J.P Bowersock,The Strokes, Ryan Adams) and toured nationally as Natalie Mishell & Company.In 2019 she appeared at the Ladybug Festival (the largest all female festival in the country) took a European tour, and released her second full length record “The Box'' gaining significant buzz with over a million streams on Spotify. She now resides in Portland, Maine

Nelson and Ritcher met in Boston, Massachusetts when they were just out of school, both cutting their teeth on the local club circuit. They each fronted popular bands in the area, and discovered a shared obsession of soul & blues greats like the Staples Singers, Albert King, Lighting Hopkins, Jimmy Witherspoon, Roberta Flack & Etta James. They began singing together often, and developed a close friendship that grew over time. Eventually, forming Dwight & Nicole, which was in the early days, a duo group; Dwight on electric guitar, and Nicole on tambourine stomping their feet and singing in harmony. They began to tour regionally- writing together and developing their sound. After a move to Burlington VT, they met powerhouse drummer Ezra Oklan (Nicole Atkins, Elle King) and the group quickly formed a trio with Nelson picking up the bass.

Their 2018 EP, Electric Lights, was recorded live to analog tape with multi-Grammy nominated producer Joel Hamilton (Aaron Neville, Tom Waits, The Meters, The Black Keys) at Studio G in Brooklyn, NY. Hamilton undoubtedly captured their sound and live energy. He also brought out their experimental side on Electric Lights. The EP introduced the band to a new wave of fans as well as opportunities including their first major label distribution deal through Orchard / Sony Music.  The year wrapped up with another Independent Music Award nomination, and the Electric Lights EP landing on several ‘Best of the Year’ lists.

They were back in the studio with Hamilton, writing and recording during the global shutdowns. The time off the road brought them to new territory as songwriters. Their second EP “Further” was released at the end of 2021. Here’s what American Songwriter Magazine had to say: “What’s so great about “Further” is its sense of immediacy… there’s something about Ritcher and Nicole Nelson’s vocal performances that makes it feel so raw, so urgent” The Burlington Free Press proclaimed it “One of the best EPs to ever come out of the Green Mountain State”.

In May of 2022, Dwight + Nicole finished recording their first full length album with Hamilton in Norway at Ocean Sounds studio. The first single off the new album, a retro-soul powerhouse called “Lift”, will be released digitally on July 29th