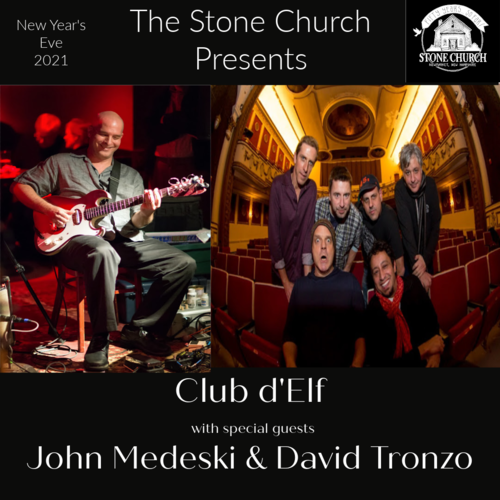 (VIP tickets include signed poster, bottle of champagne and a meet and greet with the band)

﻿For ticketed events in the indoor Performance Space:

Please follow these requirements for indoors at The Stone Church: proof of vaccination, or proof of a negative PCR COVID test within 72 hours of the event, is required for entry into the show. Please wear masks when not eating or drinking.

For this special NYE show the band is excited to have two special guests who are longtime collaborators: John Medeski and Newmarket's own, David Tronzo. The band has a long history at The Stone Church going back to the early 2000's, appearing many times with Tronzo. This show marks not only a reunion for Medeski and Tronzo, but also Medeski's DEBUT at The Stone Church!

Club d'Elf has been helping audiences lose track of time beginning with the band's first show twenty three years ago at The Lizard Lounge, and ever since then has taken it's bold synthesis of Moroccan traditional music and electronic, dubbed-out funk to audiences as far away as Japan and South America. Circling about bassist/composer Mike

Rivard and drummer Dean Johnston, each Club d'Elf performance features a different line-up, drawn from a constellation of some of the most creative improvisers from the jazz, DJ, rock & world music scenes of Boston and NYC. The band's music has been called "the music of dreams" by the Boston Globe, and draws from a startlingly wide spectrum of styles, including jazz, Moroccan Gnawa, hip hop, psychedelia, electronica, avant garde and dub. A new studio album is slated for release in early 2022.

The roaring avant-funk of electric-era Miles (and) the legato drift of the Grateful Deadheady music that doesnt neglect the tail. - Time Out New York

Crushed between the borders of Morocco, jam band land and the kingdom of avant-garde jazz lies Club dElfJames Brown-meets-Sun-Ra. - The Boston Herald

John Medeski is not easily contained to a single project or genre; he is credited on over 300 works to date, most notably as one third of the groundbreaking trio Medeski Martin & Wood. Equally comfortable behind a Steinway grand piano, Hammond organ or any number of vintage keyboards, Medeski is a highly sought after improviser and band leader whose projects range from work with John Zorn, The Word, Phil Lesh, Don Was, John Scofield, Susana Baca, Sean Lennon, Marc Ribot, Irma Thomas, Blind Boys of Alabama, Dirty Dozen Brass Band and many more. Classically trained, Medeski grew up in Ft.Lauderdale, FL where as a teenager he played with Jaco Pastorius before heading north to attend the New England Conservatory. In 2013 he released his first solo piano record, A Different Time, and current projects include a new album in the works with his band MadSkillet, St. Disruption, and HUDSON (a collaboration with Jack DeJohnette, John Scofield & Larry Grenadier), plus a documentary on Medeski Martin & Wood. www.johnmedeski.com

David Tronzo has been voted among the Top 100 Guitarists of the 20th Century by Musician Magazine and Best Guitarist in NYC by the New York Press. He is currently a Professor in the Guitar Department at Berklee College of Music, where he teaches an innovative body of extended techniques for the slide guitar stemming from his unique playing style. Tronzo has recorded and toured extensively worldwide with such artists as John Lurie's Lounge Lizards, John Haitt, Spanish Fly, John Cale, Marshall Crenshaw, Paul Simon, Daniel Lanois, David Sanborn and Hassan Hakmoun among many others. https://college.berklee.edu/people/david-tronzo