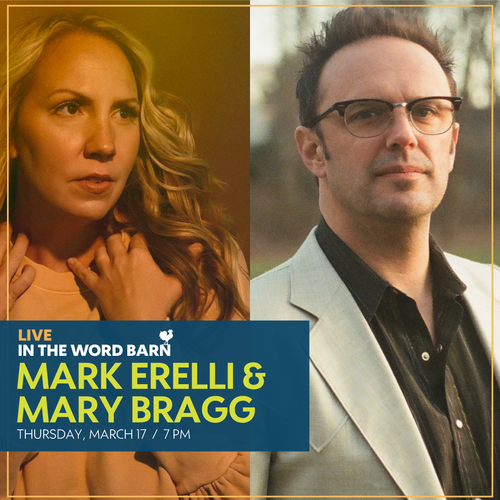 This concert was originally scheduled for November. All original tickets will be honored.

Nashville's 'Americana Queen' Mary Bragg pairs up with Word Barn favorite for what will be an amazing night!

Mark Erelli has forged a colorful career by making the art of “being everywhere all the time” seem effortless. It’s hard to think of another artist who seems equally at home serving as a sideman for GRAMMY-winning artists like Paula Cole, Marc Cohn, and Josh Ritter, or producing albums for Lori McKenna, as he does writing and producing his own material, like 2019's “By Degrees,” on which he was joined by a host of voices including Rosanne Cash and Sheryl Crow. That song was nominated for “Song Of The Year” at the 2019 Americana Music Awards, and served to reintroduce Erelli to a wider audience. And just in time, because his 2020 album Blindsided combines the exuberance of Erelli’s signature sound with the wisdom that comes with over 20 years of songwriting, capturing an artist at a point in his career where he is clearly digging deep and swinging for the fences.

“Writing is the most vulnerable state that I’m ever in,” says Mary Bragg. “But there can be a real beauty in that vulnerability when you know you’ve written the strongest thing that you can, when you’ve paired a killer melody with a meaningful lyric that says exactly what you’ve always wanted to say.”

With her stunning new album, ‘Violets as Camouflage,’ Bragg examines that vulnerability in all its delicate splendor, holding it up like a diamond to the light as she carefully studies each sparkling facet. Self-produced and self-engineered at Bragg’s home studio in Nashville, TN, the fourteen-song collection is both beautiful and blunt, the work of an artist only just beginning to embrace the full range of her talents. She writes with a keen eye for detail and an extraordinary sense of empathy, populating the album with a cast of characters grappling with pain and loneliness and longing and desire, questioning when to dig in and when to give up as they struggle to cope with hardship and loss. The arrangements here are rich and rootsy, pulling from country, folk, and blues to weave a timelessly organic blend around Bragg’s breathy, evocative voice as she sings about the kind of raw emotion that might have seemed impossible to address even just a few years ago.

“I grew up in the South, where it’s not super common to come right out and say what you feel or to talk openly about your intimate emotional experiences,” says the Georgia native. “The further along I get on my quest as an artist, though, the more natural it starts to feel. Writing this album was part of my skin shedding.”

For Bragg, the process of fully coming into her own actually began with her last record, 2017’s critically acclaimed ‘Lucky Strike.’ Hailed as a “sublime distilling of Southern grit” and one of the year’s best by NPR, the album dipped its toes into a kind of radical honesty that Bragg had only previously hinted at, and it connected with audiences in profound and deeply personal ways. The record prompted Vice Noisey to dub her an “Americana Queen,” while Music City Roots called the songs “infectious, smart, and resonant,” and World Cafe praised her “refined, sumptuously, melancholy take on Southern storytelling.” The title track earned Bragg first place in the prestigious Chris Austin Songwriting Contest at MerleFest, and the record’s second track, “Comet,” racked up over three million streams on Spotify.