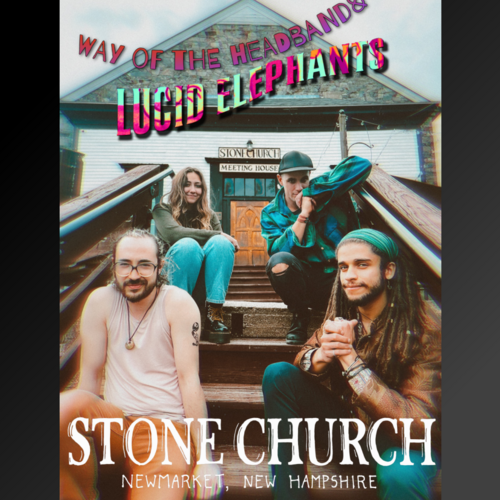 The four-piece New Hampshire based Psychedelic Rock Band is a carnival for the senses and nonsenses. Their sound is an amalgamation of various influences and genres (60’s psych rock, blues, funk and even punk) - Bursting with flavor & complexity. The band has built a loyal following in New England from their original songwriting and explosive live shows.

about Way Of The Headband

Way of the Headband was born under a covered bridge, by a brook and a cackling fire. It was in the forests of New Hampshire, when they were just Headband, that the way began to take shape and the sounds and words they heard in their heads sounded like something the world needed. So they heeded the call. Now they spread the word of rock and roll, for young and old. Way of the Headband recently added a fifth member, Mr. Rafe Matregrano and became a star of musical expression, a real cosmic roll of rocking. Some may say their sound starts its vibrations upon the frequency of instinct and winds its way up the spine into something akin to a spiritual experience. Others may say that they wake in the morning with WOTH songs echoing through their heads like errant dreams only to be relieved by a sound listening. Any way you look at it (or listen), WOTH will make its way into your head. WOTH used to be a rocking trio but then we added a fourth member, and this year a fifth. The new energy provided by MC and Riff Rafe have brought forth the true power of the Way. Hear Adam, Orion, Andrew, Marshal and Rafe on the newest Way of the Headband album ROGUE ISLAND, out now! For more info please visit: