Lookie Lookie @ The Dance Hall's Concerts By The Bridge

Lookie Lookie @ The Dance Hall's Concerts By The Bridge 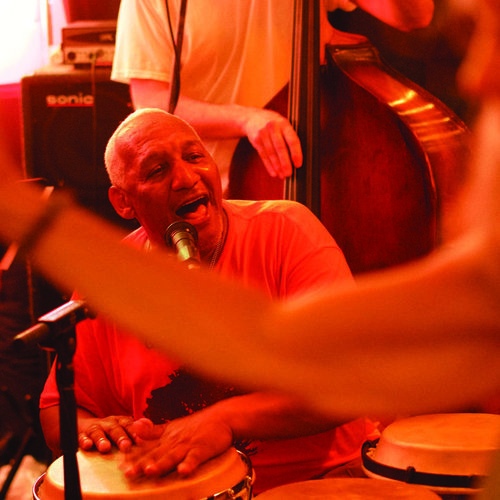 The Dance Hall presents Concerts By The Bridge at The John Paul Jones Park.

Lookie Lookie returns for a hot night of Latin music! Listeners who have heard Lookie play at the Dance Hall or elsewhere know that they put on an entertaining show full of irresistible melodies and rhythms, more than a dash of humor, and a warm, welcoming vibe. You don't need salsa skills to dance to Bugalú - you can free form, rocknroll style, and if you have them use your best couple dancing moves.

Lookie Lookie plays Latin Bugalú, a crossover genre invented by Newyorican musicians in the 1960s. Incredibly fun and catchy, Bugalu lies somewhere between the stately Cuban sounds of the 50s and the manic high salsa of the 70s. Top artists included Pete Rodriguez, Joe Cuba and Ricardo Ray, whose tunes form the backbone of the band's repertoire. The band named for an early Ricardo Ray hit, "Lookie Lookie," which encapsulates some of the pan-American fusion that went into Bugalu.

Lookie is also delighted to have discovered the terminally obscure George Guzman, who made two LPs for the essential Latin record label Fania and then disappeared. Lookie plays such Guzman gems as Banana Freak Out and Really Bad Scene."

Lookie Lookie is an all-star lineup of Boston music veterans. Music director Russ Gershon is a Grammy-nominated arranger for his work with the Either/Orchestra, and has played with Cab Calloway, the Four Tops, and Morphine among others; percussionist/vocalists Jorge Arce and Vicente Lebron are two of the grand men of Bostons Latin music scene; percussionist Rick Barry toured for years with Bim Skala Bim; percussionist Ken Winokur is one third of the Alloy Orchestra, world-reknowned silent film accompanists; saxophonist Ted DeColo has performed with Mighty Sam McLain and many others.

Brand new bassist Gregory Ryan has worked with jazz artists from Regina Carter to Mulgrew Miller to Billy Harper, and Latin artists the Chico O’Farill Orchestra, Papo Vazquez and Maucha Adnet, among many others.

Along with playing, just about everybody in the band sings, in Spanish and English.