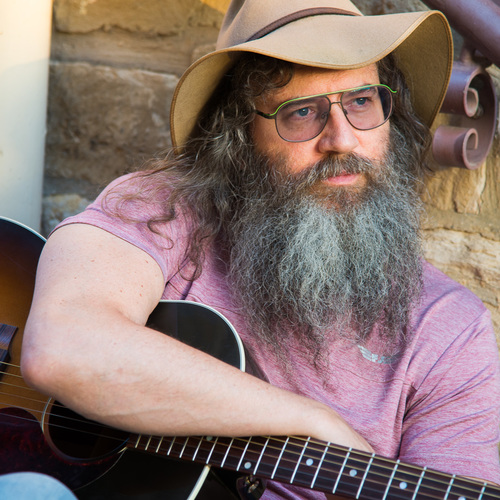 For an indoor socially-distance performance. Masks are required when not sitting at a table.

Limited Tickets are Available in groups of 4 & 6

In 2015, Lazer's indie imprint Lots of Love Records put out "Lazer Lloyd", a self-titled album that introduced Lloyd's songwriting and unique sound in his first release to the music mainstream. The album became one of the top blues rock records that year, getting widespread critical acclaim with "Burning Thunder" reaching number one on the blues rock chart.

Lazer’s second major international release "Freedom's Child" came out in September 2017 including 12 new tracks: 11 originals plus Lazer’s take on Dylan and Hendrix’s "All Along the Watchtower" recorded with Grammy nominated producer & engineer David Ivory at his studio near Philadelphia. The album shot up the Americana charts as awareness of Lloyd’s music grew into an expanded fan base of roots music lovers.

Canadian music sage John Kereiff wrote, “Critics have noted Lloyd’s skill as a lyricist, saying he is 'able to elevate life’s joys and struggles into inspirational material'. Couple that with supple musicianship, and that makes “Freedom’s Child” one of the most compelling discs of 2017. Watch out, though - this one’s gonna hit you right in the feels. Five Stars" (Gonzo Okanagan).

On tour in Connecticut in October of 2017, Lazer stopped off at Horizon Studios to record a few of his new songs with wizard of sound, Vic Steffens in West Haven. The result was several tracks including the Americana anthem “Backstreets” which was released as a single on Thanksgiving Day and went on to pass a million streams on Spotify, going viral on Facebook and YouTube as well.

As "Freedom's Child" was shooting up the Americana chart and “Backstreets” was going viral, Lazer was already on to the next project - recording the album to become known as "Tomorrow Never Comes" with Eric Paul (Willie Nelson, Townes Van Zandt, Emmylou Harris, Kris Kristofferson etc) at Ricky Skaggs Studio in Nashville featuring (Michael Rojas on keyboards, Michael Spriggs on rhythm guitar, Eddie Bayers on drums, and bass players Mark Fain and Eli Beaird). The brilliant band created by Eric and led by Lazer Lloyd produced music that is sheer heaven.

Finally, two key songs on "Tomorrow Never Comes" which have touched a nerve with fans around the world were recorded in small intimate studio settings that captured emotional moments. "The Simple Life" was recorded by Joe Kuhlmann with a temporary studio set up inside Joe's iconic North Davidson Charlotte venue "The Evening Muse" with a video shot by Charlotte videographer Wes Cobb on the Dedmon Farm in Shelby, NC. Finally, perhaps the most impactful song on the album, "Torn" was recorded in the tiny Munis Studios in Tel Aviv with the warm deep sound and intense vibe captured in the video of the recording by Shay for his indie Docutizer Films.

The release in June 2020 was just in time to provide fans with new music in the face of the COVID-19 mass cancellation of live music. The album "Tomorrow Never Comes" has been played on over 300 radio stations across the USA and hit the number two spot on the JamBand Chart and remained in the top ten on the chart for three months. The outpouring of emotional comments has been humbling and overwhelming - you can read a sample here. https://tomorrownevercomes.carrd.co/

During the pandemic Lazer's livestream free Sunday shows became a source of fellowship and comfort for a growing audience who became friends online in a warm musical and spiritual hangout that continues every week and is now a podcast as well, "Inside You with Lazer Lloyd".

Lazer Lloyd is returning to the road with a Spring Tour in the USA in 2021 and looks forward to finally seeing everyone for a series of safe live music experiences to once again share the magic of in person performance.