Laney Jones and Mary-Elaine Jenkins - Live in The Word Barn

Laney Jones and Mary-Elaine Jenkins - Live in The Word Barn 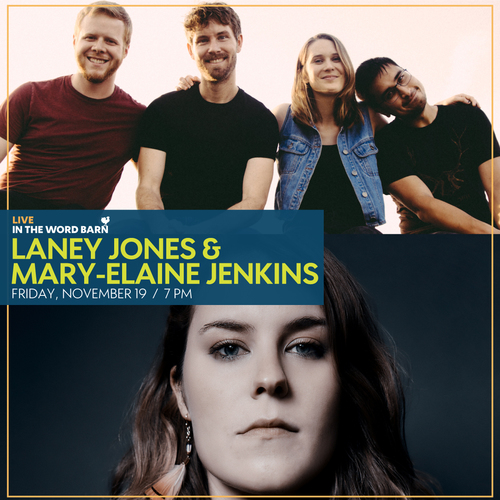 A co-bill with some of the best up-and-coming talent on the scene today.

Mary-Elaine Jenkins is a Brooklyn-based songwriter, singer, and guitarist. She has been named among “5 Up-And-Coming Women Musicians You Should Know About” (Bust Magazine), described as "standing righteously above other young pretenders" (Glide Magazine), and her voice has been called "a mix of cloves, sage, ash, thorns, and honey” (The Deli NYC). Her full-length debut, "Hold Still", was produced and engineered by Thom Beemer and released in September 2018. She is currently working on a new record.

On Laney Jones, No Depression says, "It's not quite folk, it has hints of pop perhaps, and it rocks like no other."

There's a sort of magic when you meet someone who’s doing what they're clearly meant to be doing. You can feel an electricity in the air—an energy that can't quite be explained—but you know it when you see it. This is undeniable when you meet Laney Jones. In a few short years, since picking up the banjo, this young songwriter and bandleader went from playing rural Florida watering holes to performing on PBS alongside Alison Krauss and licensing music for the likes of Disney Pixar.

Laney has received accolades from No Depression and L.A. Record, as well as the legendary Alison Krauss. As an unsigned artist, she’s managed to grace the stage at New York’s Lincoln Center and DC's Kennedy Center for the Arts, feature on PBS’s Great Performances series, earn corporate sponsorships and licensing deals, and receive nationwide college radio spins for her original songs. Currently, her music is spinning in steady rotation on over 50 CMJ indie radio stations across the country, and her voice can be heard on soundtracks of films and TV from the likes of Disney and Dreamworks. Laney’s also won many prestigious songwriting and new artist competitions, most notably the prestigious John Lennon Songwriting Contest.