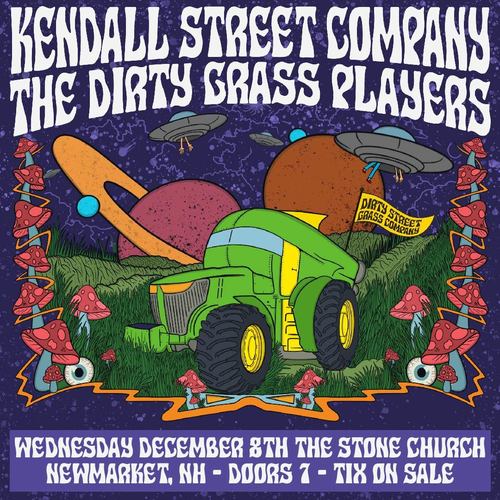 Kendall Street Companyis a jam-alt rock band based out of Charlottesville, Virginia. From late night jam sessions at the University of Virginia to main stages at venues and festivals throughout the country, Kendall Street Company has broken the mold ofimprovised rock and entered a world ofjazz-grass infused psychedelic bliss. The band's musical style embraces mind-altering riffs as well as soulful and jazzy wit, while remaining true to their folksy songwriting roots. With no two shows ever the same, word of mouth has quickly grown a ravenous fanbase eager to hear their favorite studio tracks explored and extended as part of a live community. As seasoned KSC fans can tell you, any one of their songs could easily turn from a fun sing-alongto acacophonous headbanging garage-rock soundscape, before finally resolving into apeaceful ambience.

Hailing from Baltimore, Md The Dirty Grass Players have established themselves with one toe-tappin foot in traditional bluegrass and blazing musicianship that pushes boundaries. Comprised of Connor Murray on Bass, Alex Berman on Banjo, Ben Kolakowski with the guitar, and Ryan Rogers on mandolin, this four piece is successfully bringing their growing fan base a down, dirty and heated performance. Their ability to seamlessly transition from down home bluegrass to spirited improvisation makes each performance unique. Throw in some Allman Brothers, Pink Floyd or a dash of southern rock and youll quickly understand what they mean by Dirty Grass. Their self-titled debut CD The Dirty Grass Players captures this energy and as 2017 winner of Charm City Bluegrass & Folk Festival Band Competition clearly indicates, this is just the beginning. Successfully touring the Mid-Atlantic and festival appearances, this year finds the group expanding along the East Coast and building on this momentum. For anyone that enjoys a musical throw down by skilled musicians its time to get your grass dirty.

The last 2 years have consisted of a busy touring schedule that has kept The Dirty Grass Players from releasing new music, but in 2019 they are excited to get new tunes out into the world. Their first single Grand Voyager - released in April of 2019 -  is a fast-pickin tune that pays homage to their humble beginnings. Reminding their fan base why they love them, this tune will also help any non-bluegrass-lover transition into becoming an appreciative consumer of bluegrass music, or should we say Dirty Grass.

Entering into their sixth year together, The Dirty Grass Players are ready to release their 2nd studio album, Beneath the Woodpile. Put together with alluring harmonies, lyrics, and melodies, the band presents a sound precisely at the crossroads of traditional and progressive bluegrass. This isnt just another run-of-the-mill bluegrass album or band; its cathartic and dirty grass.