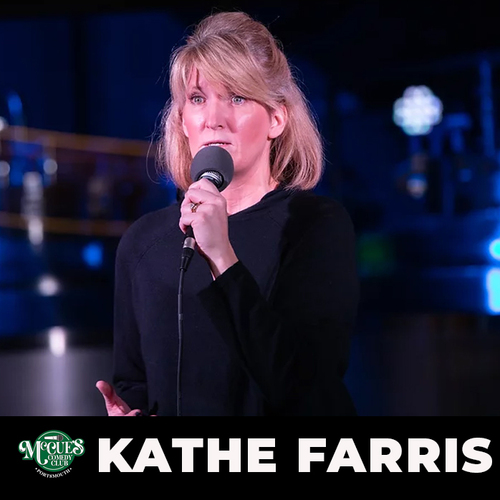 Kathe Farris is a Boston-based stay-at-home mom, stand-up comedian, and snack cake enthusiast. She hit the comedy scene a little late in life but quickly made up for it by becoming a Comic-in-Residence at The Comedy Studio and a finalist in the Boston Comedy Festival. She is a fixture on local stages all over New England thanks to her intelligent yet accessible material. Kathe performs regularly for private and corporate events and sometimes a suburban middle school…sometimes!. Known for her understated demeanor and punchline-heavy writing, her act impresses audiences across the country. Kathe’s weekly show Farris and Friends Comedy Hour is a “The Boston Globe’s Critics Choice”.

Mike Gray is living proof that a horrible childhood can be turned around into an equally horrible adulthood. He is a Portland, ME based comedian who has been performing throughout New England for about 6 years, although he'd rather not count 2020. It has been said that “he has a clear character” and “…a distinct voice for dark humor.” He was a finalist in New England’s Best Bar Comic competition in 2017, performed at Bricks and Bridges Comedy Fest 2019 and 2021, and has competed in Last Comix Standing in 2020 and 2021.

Josh Day, a New Hampshire native and current Massachusetts resident, has been performing comedy for over six years. He began his comedy career after a freak paddle boarding accident almost left him paralyzed, and with a broken neck. After having broken his neck, Josh decided it was time to break a leg doing stand-up.