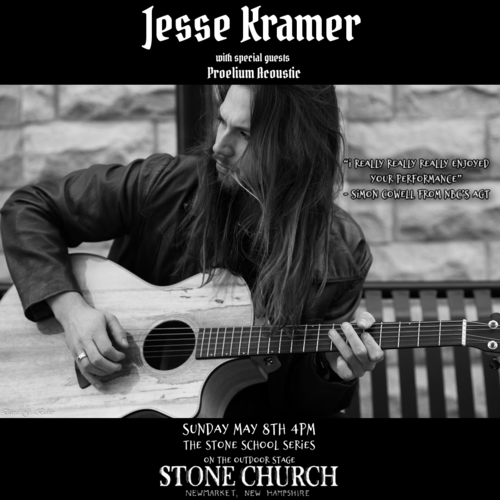 Jesse Kramer’s story is as authentic as it is unpredictable. It’s a story of struggle, adversity and rebirth. A story still in its preface as the young 24 year old singer and songwriter from Indianapolis, who now resides in Nashville, seeks to kick-start the official rebirth of rock n’ roll for the modern world.

“Rock n’ roll is NOT dead! It thrives on lives with struggle, passion and soul,” Jesse emphatically claims. “It takes guts, focus, and drive. I hope to become the modern world's reminder that rock n’ roll still exists, and is an avenue which people can channel emotions and thoughts through music, just as I do.”

From a very early age in life, Jesse Kramer always knew that music and singing were his only genuine means of communicating his personal thoughts and feelings on life. His old soul from within began guiding his thoughts and decisions in high school at the age of 14. That’s when he first began writing and recording his own music after growing up listening to a wide range of artists like Neil Young, Led Zeppelin, Creedence Clearwater Revival, Lynyrd Skynyrd, Marilyn Manson, Chris Cornell and even Eminem. Jesse quickly developed his own distinctive and gritty sound by balancing elements of rock n’ roll, soul, and R&B music. Something he now simply refers to as “The Jesse Kramer Sound.”

At the age of 17, after growing up in a strict religious household where everything about the way he should live his life was prescribed, Jesse was given an ultimatum by his parents: Choose whether to continue playing music and be kicked out of the house, or put the guitar and mic down for good, and pursue a life as dictated by religion. He chose to carry on with music, and faced a period of homelessness by couch-surfing and sleeping in his car, even while still in high school, but in the name of pursuing his dreams of bringing rock n’ roll back.

“As I grew older I became more awoke, as music broadened my ability to see real truth and understanding,” Jesse explained. “More than just what religion was teaching me growing up. Music is universal and is able to be seen, created, and felt. Just as some say how God is like the wind.”

In 2014 after he turned 18, Jesse decided to move from Indianapolis to Nashville to get serious about pursuing his ambitions as a songwriter. Thus, once again redirecting his life’s trajectory much to his family’s apprehension, he picked up and moved on.

“Nashville has been what I consider my College, as I had chosen to leave my full-ride to traditional College in Indianapolis, due to life circumstances,” Jesse articulated. “Nashville has definitely taught me a lot about the life of a musician. It’s definitely a cool town to get your feet wet in, but I don’t believe this is somewhere I will be forever. It has definitely given me the education I needed, so I can apply it to the way I like to do things.”

In 2018 his determination and hard work began to pay off when he was discovered and personally invited by the Executive Producers of FOX-TV Networks to perform on season 2 of their music competition series The Four: Battle for Stardom. During his auditions, Jesse gave rousing and soulful performances of Jeff Buckley’s “Hallelujah,” Jimi Hendrix’s “All Along The WatchTower,” Joe Cocker’s “You Are So Beautiful,” and others, impressing both the studio audience and the show’s executive judge panel consisting of Sean Combs, DJ Khaled, Meghan Trainor and Fergie.

In 2019 Jesse released his first five song EP called Breakthrough of original music he wrote, recorded and self-produced. Later that year - just before the worldwide COVID-pandemic would shut down much of the TV & Music industry - Jesse was invited to audition and perform on season 15 of NBC’s popular TV show America’s Got Talent, which began airing in 2020. Covering Lady Gaga’s pop hit song “Bad Romance” Jesse’s vibration and intensity once again brought the studio audience to their feet, this time receiving a standing ovation. Even legendary music industry executive Simon Cowell blessed Jesse not only with his respect, but with his undivided attention, noting he “Really, really, really enjoyed your performance. You have my respect for coming onto this show.”

In 2020 Jesse released his second EP of original music; Quarantunes (part 1/2) written in the midst of the COVID-19 pandemic. Once again the songs illustrate his musical depth, as he dives into his more than 200+ catalog of original songs.

Now at 24, the ambitious and up-and-coming Rockstar in the making is staying busy with touring, recording new music, and building upon his blossoming songwriting career, while his fan base continues growing rapidly.

This Fall Jesse will release new music, and music lovers will once again hear how Jesse transcends a sound that is not only reminiscent of years past, but new, fresh, and authentic for the modern world. A sound that is fastly becoming regarded as a genuinely one-of-a-kind, giving him the ability to bring a wide range of music lovers together.

“I think the best way to really understand the world is through music. I would like people to feel and vibe with me, and to let them know there is still authentic, raw and genuine music out there. Simply put, I want my music to really touch people... and I am ready to do whatever it takes and go anywhere I must to make that happen.”