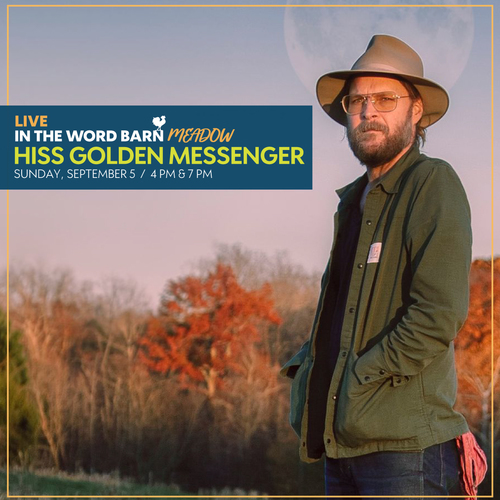 M.C. Taylor, who performs under the moniker, Hiss Golden Messenger, makes his solo Word Barn debut on the heels of his critically acclaimed 10th studio album, Quietly Blowing It (Merge Records / June 2021). Of the new album, American Songwriter exclaimed, “there’s a reason why Hiss Golden Messenger has emerged as one of the more prominent buzz bands of the last couple of years.”

His 2019 album, Terms of Surrender, was nominated for Best Americana Album at the 63rd Grammy Awards, and brought the indie folk-rocker into the mainstream, amassing millions upon millions of streams, praise from the likes of NPR and Rolling Stone, and ultimately resulted in collaborations with Taylor & Griffin Goldsmith of Dawes, Zach Williams from The Lone Bellow, guitar great Buddy Miller and more. Don’t miss this rare solo, appearance!