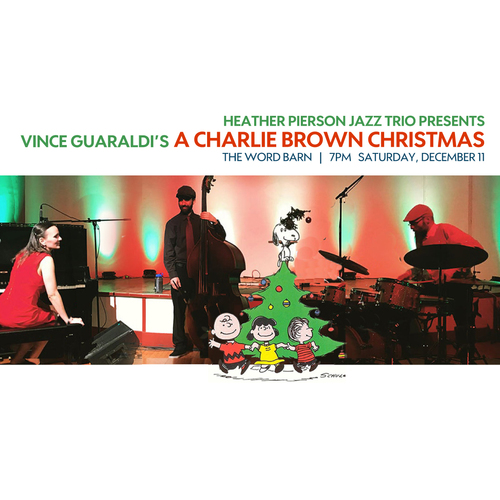 ***PLEASE NOTE: As much as we were looking forward to using the magnificent Orchard Chapel, we have moved this event back to The Word Barn where we already have all protocols in place to help keep us safe as we enjoy this fun and festive event!***

The 12 Nights of Christmas returns to the Orchard Chapel this holiday season with The Heather Pierson Jazz Trio (Heather Pierson, piano and vocals; Shawn Nadeau, bass; Craig Bryan, drums) and their take on Vince Guaraldi’s A Charlie Brown Christmas.

A Charlie Brown Christmas was originally telecast in December 1965 and was an instant hit with audiences who connected with Peanuts creator Charles M. Schultz’s cast of characters – especially with its rounded-headed hero Charlie Brown, his woefully scrawny Christmas tree, and his typewriter-wielding dog Snoopy. Nearly given the ax by CBS studios at the time of its release, this beloved holiday classic resonates with both children and adults of every generation. Over fifty years on, it still holds up as one of the most endearing Christmas tales ever told, and the story of commercialism run rampant echoes clearly to this day.

The musical score for A Charlie Brown Christmas, composed by the late Vince Guaraldi, is just as poignant and touching as the story and includes the hugely popular hit “Linus and Lucy”. His gentle jazz riffs established musical trademarks that, to this day, still prompt smiles of recognition.

The Heather Pierson Jazz Trio will perform the entirety of the Charlie Brown Christmas album as recorded by the Vince Guaraldi Trio, as well as other Guaraldi compositions.

At this time, proof of full vaxx and mask wearing is mandatory in order to enter The Orchard Chapel.