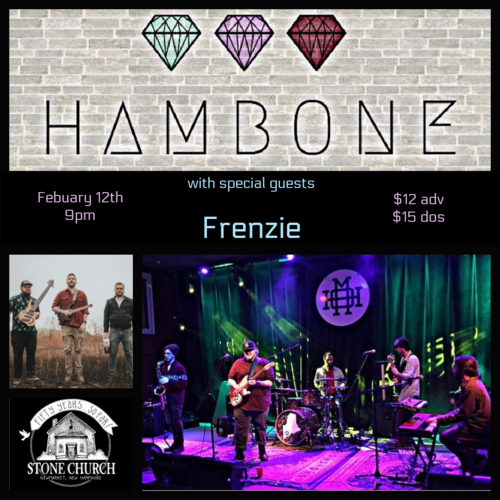 Hambone is a 5 piece Urban Funk Band from Portland,ME that has been playing together for over 7 years with roots in New Orleans style Afro beat grooves. As a group they have shared the stage with members of Phish, Allman Brothers , The Meters , The Neville Brothers and Phil and friends to name a few.

Frenzie is a 3-pc progressive funk group from Southern Maine consisting of Colin Kolmar(drums), Joe Harding(bass) and Tom Menzie (guitar). While this project was established in 2019, all 3 members are seasoned players from their 15+ years in the scene with other groups. This combined musical experience all blends together to create the sound that is Frenzie; pulling from genres such as Reggae, Jazz, Prog Rock, Funk, and Soul. The band specializes in spontaneity, energy, and inclusion. Whether it’s an original tune, or a cover, they are well equipped to take the song in any direction that suits the mood. This fluidity and range allows them to draw in an eclectic crowd; not only of seasoned listeners both young and old, but also casual brewery and bar goers. Their choice of covers and originals lends itself to a variety of fan bases. Their engagement of the crowd is goofy and playful, qualities they have both on and off stage. This light-hearted positive attitude translates into their lyrics and sound. Being a 3-pc band, there is plenty of space and opportunity to catch guest performers or “Frenz” adding a dynamic range to each performance.