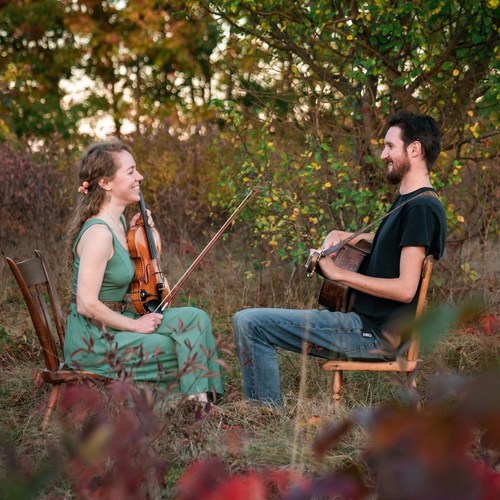 The music of Green Heron stretches across the entire folk landscape. Old-time, folk, bluegrass, country, Irish and blues music are all represented as the band brings the back porch to the stage. Featuring Betsy Heron (formerly Green) on fiddle, banjo and vocals, and Scott Heron on guitar, banjo and vocals, the duo has been sharing New England stages together since 2016. The two songwriters weave the contemporary with the traditional and deliver high energy performances.

Betsy, brought up playing country music with her family's band in rural Massachusetts, still plays alongside her three sisters in The Green Sisters. Meanwhile, Scott spent several years in various metal bands touring New England and much of the country before discovering folk and bluegrass. Despite their very different backgrounds in music, the pair still draws from their roots when writing and performing and have found a common love for Americana music.

To date, Green Heron has released three albums: Folk Heroes in 2018, New Pair of Shoes in 2019 and Feet on the Floorboards released in 2021. The latter of which was recorded at their home during the pandemic by Ben Haravitch and Circus Tent Studio.

Throughout their home state of New Hampshire, the duo has been featured in a variety of publications and have made appearances on several television and radio stations including WMUR, NHPR, WKXL, and WSCA. In the summer of 2020, the group was featured on WMUR's New Hampshire Chronicle as part of their Summer Songfest. New Hampshire Magazine featured Green Heron among the Editor's Choice picks for their Best of 2020 issue and Seacoast Edge listed both Folk Heroes and New Pair of Shoes among their best albums of 2018 and 2019 respectively.

The band occasionally performs on stage and records in-studio with a variety of acts throughout New Enlgand. The two founded the Americana quartet Mama Ain't Dead and released their self-titled debut album in September 2019.

Green Heron has shared the stage with several touring acts including The Del McCoury Band, The Way Down Wanderers, and Them Coulee Boys in world-class venues such as Prescott Park, Club Passim, The Burren, Riverwalk Cafe, Word Barn, and Book and Bar.