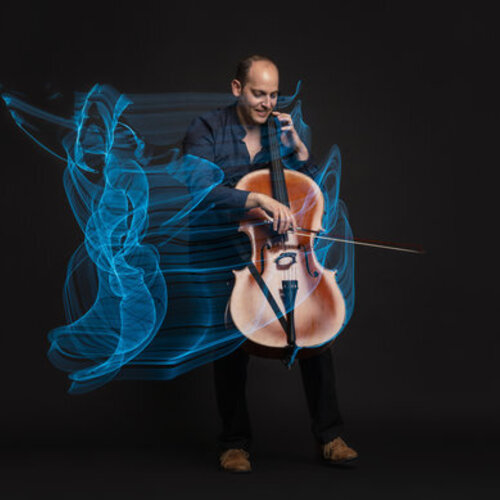 Christylez Bacon was born and grew up in Washington, DC and attended the Duke Ellington School of the Arts. He has been featured on Morning Edition, National Public Radio, performed at the John F. Kennedy Center for the Performing Arts and with the National Symphony Orchestra. Christylez founded the Washington Sound Museum, a regular concert series at the Atlas Performing Arts center in Washington's H Street NE. Bacon classifies his largely diverse music as progressive hip hop.

Mike Block Mike Block is a Grammy Award-winning cello player, singer and composer passionate about cross-cultural collaboration through music, and committed to inspiring individuals and connecting communities. Acclaimed by the New York Times for his "vital rich-hued solo playing”, and by Salt Lake City Desert News as “a true artist... a sight to behold”, Mike Block “is one of the bravest, most intriguing musicians on the American fusion scene.” (Gramophone). Mike Block’s solo show offers a rich mixture of classical repertoire, folk music, original compositions and songs that draw inspiration from his diverse collaborations.

Since 2005, Mike has been a member of Yo-Yo Ma's Silk Road Ensemble, with which he has been featured as a cello and vocal soloist, contributed arrangements and compositions, and earned a Grammy Award in 2017 for their album Sing Me Home. Mike has been invited to perform as a concerto soloist with the Illinois Symphony, The Knights, China National Philharmonic (Beijing), Shanghai Symphony and Guangzhou Symphony Orchestra, and has collaborated in performances and/or recordings with Stevie Wonder, The Eagles, Bon Iver, Will.i.am, The National, The New York Philharmonic, Bobby McFerrin, Allison Krauss, Rhiannon Giddens, Mark O'Connor, Rachel Barton Pine, Edgar Meyer, Julian Lage, and many others.

Be sure to get your tickets in advance!