Forever Young: A Tribute To The Music Of Neil Young

Forever Young: A Tribute To The Music Of Neil Young 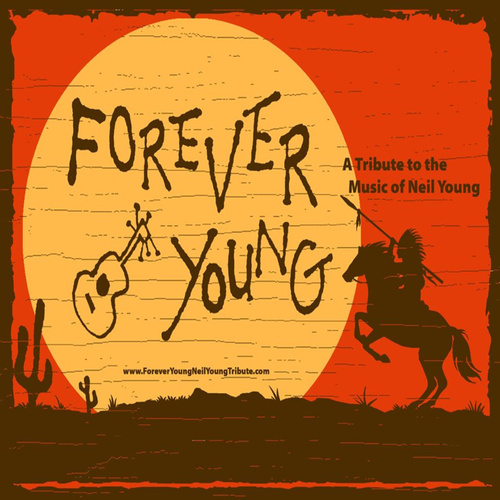 Now in their fourteenth year, the Forever Young band is a group of performers

that pay tribute to the SONGS of Neil Young. No one in the band tries to imitate

Neil Young. There are five vocalists in the band and the songs are fronted by

different members with added backing harmonies. All of the musicians performing

national and regional tours. In addition, they are all fans and have been influenced

by the music of Neil Young. Four of the members are performing singer songwriters

who have their own projects on the side. Drawing on the 40+ year career of Neil

Young the show highlights many of Young’s popular songs and a few “deep cuts”.

for. Their performances are reminiscent of and are heavily influenced by the "Four

Way Street" live album recorded by Crosby, Stills, Nash, and Young. They are a high

energy band that is just as fun to watch as to listen to. Audiences are always

“wowed” by a Forever Young show!

THE SHOW: A typical Forever Young show will be two sets of music and run from 2-3

hours depending on the venue and audience. Sometimes even three hours is not

enough for the fans! During the set they will seamlessly play through the rock, folk,

and country styles of Young's music. The performers trade off on lead vocals and

will switch instruments many times during the night. Two, three, and four part

harmonies have been incorporated into many of the songs. The numbers include

of the Real phase. Forever Young never disappoints and garners new fans with

Amy Bedard joined Forever Young as a violinist and vocalist in 2011. She is a

where she obtained a degree in Music Education. She is public school music/

plays with the New Bedford based Celtic punk band, The Pourmen. Most recently

including John Fuzek and Dan Lilleyof Forever Young. She has a wedding business

called Classy Strings and continues to play in orchestras, churches, and for theater

Sean Finnerty is a bassist, guitarist, and singer/songwriter who has been

performing in the Northeast for more than three decades. His first band,

the Vectors, was a punk pop trio playing his original songs. He then played

for the Marlowes, a power-pop outfit from Providence, with whom he performed

and recorded for eight years, before leaving to pursue other interests, including

recording his own songs in his basement, embracing a lo-fi aesthetic. He also

for many area country bands, including the Hayloft Jamboree, with whom he was

inducted into the Rhode Island Music Hall of Fame in 2013. While Sean often plays

Country, Branded, Kenny Law and the Lawmen, and Bobby Carlson and Stones

River. He has shared the stage with the Silos, Luka Bloom, Marshall Crenshaw,

Drivin'n'Cryin', the Del Fuegos, and Buddy Jewell. In addition to Forever Young,

and Selena Wilson. He also gigs regularly with his duo, theHeads of State, as well

as the bands Biscuit City and the Robcats.

John Fuzek is a Rhode Island based, award winning singer-songwriter-guitarist that

years. His folk-rock sound, unique guitar playing and vocal style has won him both

social issues, history and relationships. He has recorded full length or contributed

songs to ten CDs that have been heard around this country and in others as well.

In addition to his solowork and his work with the award-winning band, Forever

Young, John also performs as part of the award-winning Fuzek-Rossoni duo. He

has shared the stage with suchnotable artists as: Judy Collins, Steve Forbert, Paula

Crenshaw, and many others.

studying drums at the age of 11 which led to a early musical career. Playing with a

club and the college concertcircuit, as well as opening shows with his band Rizzz

for some great nationally acclaimed acts, such as Bonnie Raitt, Lowell George and

performing regularly with other bands such as Dan Lilley and the Keepers, Violin

River, and The Joint Chiefs.

brother's girlfriend. The girl's grandfather had made it by hand out of leftover

scraps of wood from his carpentry shop. Dan named the guitar The Tree because

it was as stiff and stubborn as an old oak to play. But, he wrestled and wrangled

with that guitar and taught himself to play every song in the Neil Young Complete:

Volumes 1 and 2 song books. During his long career Lilley has fronted many bands

such as Tyger Tyger, The Flying Ditchdiggers, and Lovetrain. Dan was voted Best

Male Vocalist in the 2010 Motif Magazine Music Awards. Dan's songs have been

featured on The Flying Ditchdigger's 1991 CD release, Still A Kid At Heart. He also

released3 CDs with his band Lovetrain (Off the Track, Almost Home, and Destination).

compilation CD and Hope for the Holidays, a Christmas compilation benefiting The

taverns, and restaurant in his duo, Dan Lilley & Scatman or with Forever Young he’s

out there in his 4 piece rock and roll band, Dan Lilley & The Keepers. The Keepers

Guys Rule”, but in reality this may be the best lineup Lilley has ever played in. The

throughout the state. The Keepers are an outlet for Dan’s latest original songs

and are working on a new recording..

twenty years. He started in the area with the band Fat Glass and then began

playing mandolin for No Shamus. From 2004 until 2015 Vendettuoli played banjo

with the award winning bluegrass band, Rank Strangers. As the former owner of

PM Recording in North Kingston, Pete had his finger on the pulse of the RI Music

Scene and accompanied many of the area's finest talent. He has been fronting the

dance/jam band The Free Radicals since 2015 and is co-founder, with current and

former members of Forever Young, of the band The Joint Chiefs, where he has

an outlet for his original music. In addition to this, Pete is also a singer-songwriter