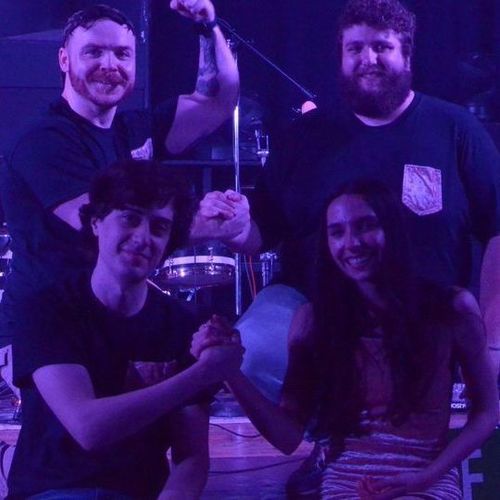 The Wormholes who come to the Stone Church for their first time all the way from Charlotte, NC. have been described as a blend of “art-pop and psychedelic rock”.

Their new album “Light in the Dark” is out now. The album is a journey through an atmospheric dreamscape, navigating the mysteries of the heart, the wild unknowns of human emotion. Vocal effects harken the sound of consciousness, as if speaking to the listener from deep inside their own mind, from a deep, cavernous, rarely-touched place within.

Little Fuss is an indie-pop band comprised of vocalist Olivia Martinez and producer/bassist Cody Von Lehmden. After a chance meeting while studying abroad in Spain in 2019, the duo immediately bonded over a shared passion for cheap wine and creating art of all forms. The past two years have seen the band grow together as a songwriting duo--even continuing to work together after being kicked out of Spain due to COVID-19. Now based in Boston, their musical ambitions are larger than ever as they roll out their debut EP.

Equally influenced by iconic 80's artists like The Talking Heads and Kate Bush, and modern pop artists like Caroline Polachek and Billie Eilish--the group's mission is to combine forward-thinking production and sound design with whimsical lyrics and storytelling.

Despite coming up as a band during the pandemic, Little Fuss have already made huge waves with the release of their first three singles. Their debut single "Watch Out" and it's accompanying self-shot music video were featured on countless indie blogs and radio stations, including YVYNYL and Crack in the Road, and being voted Song of the Week on reputable Boston radio station Boston Emissions five weeks in a row.

Set to be released on August 20th, their debut EP "Hazy" was recorded over a period of three weeks in Los Angeles with legendary, Grammy-winning producer Carlos de la Garza. The resulting four tracks offer something very rarely seen in such a new, young band. Sweeping gracefully from the bombastic, hyper-pop tinged lead track "Watch Out" to the smooth 80's synth-pop influenced standout "Human of the Century, the band firmly establishes both their maturity as songwriters and their willingness to take risks