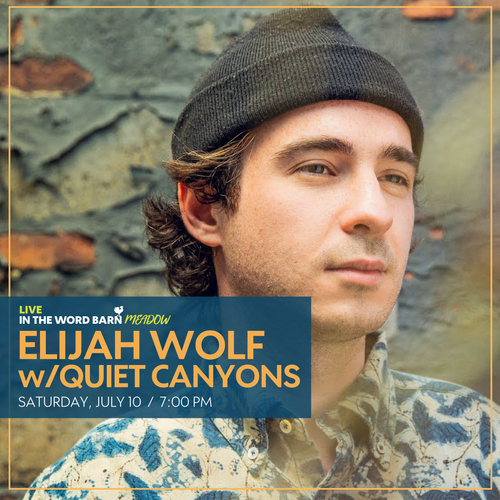 “At its core, this is an album about stopping in your tracks long enough to observe and appreciate the beauty that surrounds you, even when things seem like they’re at their worst,” says Elijah Wolf. “It’s about looking into the darkness and finding the light.”

Given the state of the world these days, it’s hard to imagine a more fitting—and necessary—moment for Wolf’s stunning new collection, ‘Brighter Lighting,’ to land. Recorded with acclaimed producer Sam Cohen (Kevin Morby, Andrew Combs) and an all-star band including Wilco guitarist Nels Cline, Photay and Josh Jaeger (Fleet Foxes, Angel Olsen), the album marks the start of an adventurous new chapter for Wolf, who moves beyond the spare and isolated bedroom folk of his earlier work here in favor of a more collaborative, immersive sound. The record’s arrangements are lush and textured, fueled by vintage synthesizers and psychedelic guitars that come together in swirling Technicolor landscapes, and the writing is bold and ambitious to match, hinting at everything from Fleetwood Mac to Kurt Vile as it reckons with doubt and hope, anxiety and comfort, loneliness and connection. There is nostalgia and longing in the music, to be sure, but ultimately ‘Brighter Lighting’ is a meditation on growing up and being present, on gaining perspective by sitting still in a world that, for all its painful flaws and shortcomings, remains a place of infinite possibility and wonder.

‘Brighter Lighting’ follows Wolf’s critically lauded 2018 debut, ‘On The Mtn Laurel Rd.’ Recorded almost entirely alone in a small Brooklyn bedroom, the album grappled with loss and letting go and introduced Wolf as an evocative writer with a gift for cinematic scene setting. The Wild Honey Pie hailed the record’s “richly detailed lyrics and emotional vocal delivery,” while Paste praised its “flowing beauty,” and the music helped earn Wolf festival bookings on both sides of the pond, from Mountain Jam to End of the Road.

On top of everything going on in the world, 2020 saw the birth of Tim Williams’ second daughter, just before having his fourth heart surgery. The nine songs on Quiet Canyons’ self-titled debut album were written and recorded in the span of just two weeks, solely by Tim in Los Angeles. This process allowed him to gain control of all the chaos in the only way he knows how to - through making music.

This album is by far his most personal and stripped down. We take a glimpse into the sleepless nights of Tim’s life. There isn't a single note sung or played that isn't absolutely necessary. Through years of songwriting (as a singer-songwriter, and in his previous band Soft Swells), Tim has learned the value of raw minimalism and the debut of Quiet Canyons embodies this fully.

Master producer Dave Lynch elevated the tracks by mixing on a vintage SSL console, at Echo Zoo Studios in Eastbourne, UK. The finished product was then sent off to Christian Wright for mastering at Abbey Road Studios in London. And there you have it: Honest. Uncalculated. Unapologetic.