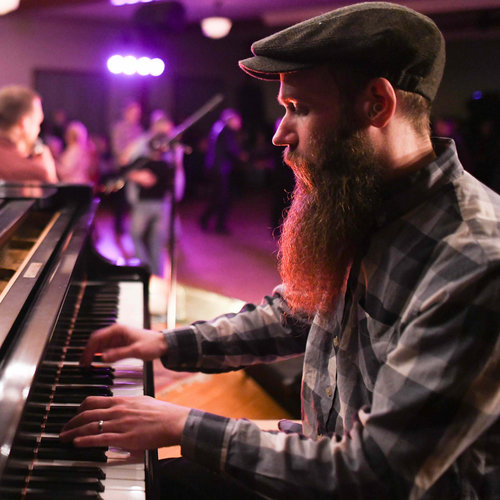 Drawing on their eclectic backgrounds and individual passions, EHKM bring together a coheseive adventure through music from past to present, local to global, but always in the here and now. Playing the music of Thelonious Monk, Charles Mingus, Carla Bley, Bill Frisell, Brad Shepik, and others plus some traditional Klezmer, Middle Eastern, and original compositions.

Keyboardist Mike Effenberger is a recording and performing artist who has been living in the Seacoast since 2007. He received the Young Beacon in Jazz award from New School University in New York City, from which he graduated in 2005. Studying with diverse artists including Jane Ira Bloom, Reggie Workman, Fred Hersch, and Joanne Brackeen, Mike has curated an unmistakably individual voice that draws on gospel, American minimalism, jazz, and 20th century music. Mike plays throughout New England with a variety of bands including Soggy Po Boys, fiveighthirteen, Jazzputin and the Jug Skunks, the secular gospel choir Rock My Soul, OURBIGBAND, Dan Blakeslee, and Weird Turn Pro, which plays his original music.

Bassist Scott Kiefner Graduated from McGill University’s Schulich School of Music in Montreal, QC, where he studied with Fraser Hollins and Chris McCann. In the summer of 2013, he was selected to attend the School for Improvisational Music Intensive workshop in New York City.

PLEASE NOTE: FOR YOUR SAFETY THIS IS A ONE SET CONCERT WITH LIMITED SEATING.

PROOF OF VACCINATION AND MASKS WHILE IN MOTION ARE REQUIRED