Eat It Up: Food Talks with Kathy Gunst & Katherine Alford

Eat It Up: Food Talks with Kathy Gunst & Katherine Alford 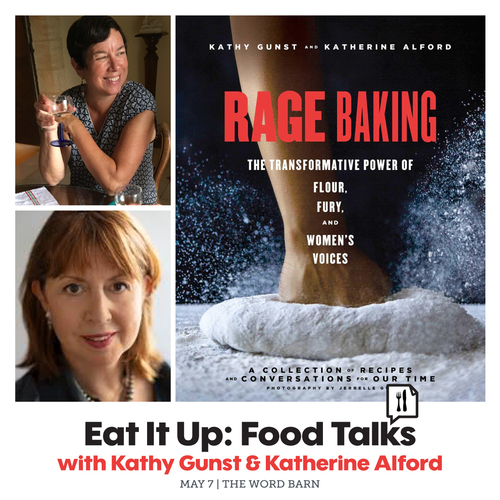 Eat it Up: Food Talks with Kathy Gunst & Katherine Alford

Join us for a reading and discussion with Katherine Alford & Kathy Gunst authors of Rage Baking: The Transformative Power of Flour, Fury...

In recent years, women around the globe have been expressing their rage, fury, and frustration in myriad ways. Some call their senators; some write checks; some join activist groups, march, or otherwise raise their voices. But many also turn to their greatest comfort—their kitchen.

Baking has a new meaning in today’s world. These days, baking can be an outlet for expressing our feelings about the current state. Rage Baking: The Transformative Power of Flour, Fury, and Women's Voices offers more than 50 cookie, cake, tart, and pie recipes, as well as inspirational essays, reflections, and interviews with well-known bakers and impassioned women and activists, including Dorie Greenspan, Ruth Reichl, Julia Turshen, Genevieve Ko, Rebecca Traister, Pam Houston, Cecile Richards, and many more. Rage Baking unites like-minded women who are passionate about baking and change.

Katherine Alford ran a New York Times 4-star kitchen, has been a Greenmarket manager, and instructor and director of Peter Kump’s Cooking School (now Institute of Culinary Education). She spent the last twenty years at the Food Network.

Kathy Gunst is a James Beard Award–winning journalist and the author of fifteen cookbooks, as well as the resident chef for NPR’s Here and Now. She writes for many publications, including the Washington Post, the New York Times, Food & Wine, and others. Gunst teaches food journalism and cooking at schools and universities around the globe.