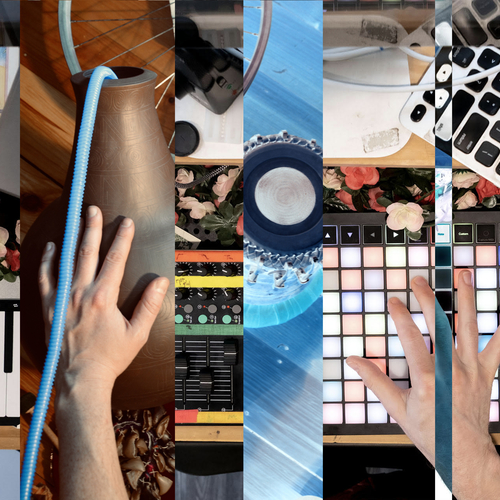 A multimedia composition propelled by electroacoustic percussion, Imprint combines Adler’s multidisciplinary approach to drumming and composition with live processing, synthesis, and video manipulation by Stiles, resulting in kaleidoscopic time structures and shifting audiovisual spaces. In the performance, a database of found footage is deconstructed by the sounds of the instruments, evoking a meditation on human absence and the fragility of form.

Air Space is a duo with keyboardist Mike Effenberger and percussionist Brian Shankar Adler. Drawing from minimalist structures and the occasional inside-out pop tune, audiences have described the duo as: “a sound bath of focus music to have a drink to.

Brian Shankar Adler is a multidisciplinary drummer, percussionist, and composer. He has been described as "a polyrhythmic force.. New York City gritty yet still somehow capable of evoking the delicacy of a summer breeze" by Brad Cohan of JazzTimes. Adler has worked with Bomba de Tiempo, Sheila Jordan, Guillermo Klein, Michael Leonhart, Frank London, Kate McGarry, Kamala Sankaram, Elizabeth Swadow and is a member of the eclectic rock band Bombay Rickey and trash orchestra Bash The Trash. www.brianadler.com

Jesse Stiles is an electronic composer, performer, installation artist, and software designer. Stiles’ work has been featured at internationally recognized institutions including the Smithsonian American Art Museum, Lincoln Center, the Whitney Museum of American Art, and the Park Avenue Armory. Stiles has appeared multiple times at Carnegie Hall, performing as a soloist with electronic instruments. www.jessestil.es

Mike Effenberger is a recording and performing artist who has been living in the Seacoast since 2007. He received the Young Beacon in Jazz award from New School University in New York City, from which he graduated in 2005. Studying with diverse artists including Jane Ira Bloom, Reggie Workman, Fred Hersch, and Joanne Brackeen, Mike has curated an unmistakably individual voice that draws on gospel, American minimalism, jazz, and 20th century music.