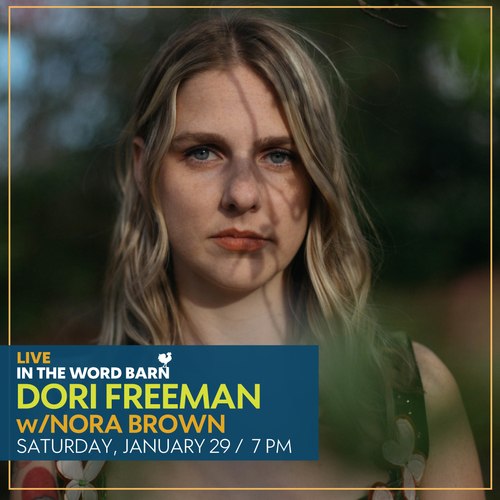 Join us for a special album release concert with Dori Freeman, with special guest Nora Brown.

Ten Thousand Roses, the fourth studio album from singer-songwriter Dori Freeman, showcases an artist who has cemented an inimitable signature sound while simultaneously establishing her as capable of a wide variety of styles. Freeman is about as “bonafide” as an Appalachian artist can be:  she was raised among a family of musicians in the mountains of Southwest Virginia. Yet here she shows how multifaceted she is as an artist and how eclectic she is as a person, defying and expanding notions of what it means to be someone from the region, a young woman in the music industry, and as an Americana artist.

Her soaring alto and singular style are on fine display throughout this collection of nine originals and one cover. She wrote the songs during the pandemic, when, like millions of others, she stayed home and spent more time outside. “I really observed and appreciated nature during that time,” she says. Natural elements such as storm-clouds, wildflowers, and spiders show up as motifs throughout the record, which examines everything from being deeply in love with someone to realizing that you don’t need another person to complete you.

Nora Brown started learning music at the age of 6 from the late Shlomo Pestcoe. From his studio apartment in Brooklyn, Pestcoe instilled in her the belief that music is meant to be shared.

Now age 16, Nora plays old-time traditional music with a particular interest in eastern Kentucky and Tennessee banjo playing. Along with the banjo she’s interested in techniques of unaccompanied ballads form the Southeast region of the United States.